The Gods Are With Us 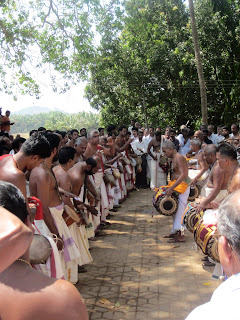 (Feb. 10) Waking to a cool temperature before the sun made its appearance, we walked away from “downtown Cheruthuruthy” up a road I dimly remembered. We began seeing signs for Eco-Lodge and made that our goal, ascending into the hills. And here was the first signs of an emerging tourism, a lovely place with cozy cabins, a stunning view, a swimming pool and a restaurant with a paint job. We ordered breakfast and then descended to meet Raymond and board the two buses to Nelluvai, the place where I had gone daily for my drumming lesson all those years back. And yet, it all felt familiar, standing on the crowded bus, looking for the transfer in the town of Ottupara. Back then. a man adopted me as his charge to make sure I boarded the right bus and was always there in the crossroads. I half-expected to see him again, but miracles only go so far. And there were many on this day.
We alighted at the Nelluvai Temple and there he was—Narayanan Nair, the teacher who had sat across the drum from me beating time with a stick, patient with my fumbling efforts and pleased with each inch of progress, a drum guided me through an unfamiliar, looking as trim and handsome as ever. We exchanged hugs, greeted his wife (who I had met, but didn’t know well) and after the formalities, sat down to a perfect Kerala meal. Kerala rice (thicker and rounder than basmati) in the center of a banana leaf, papad, sambar and all the little curries on the side that you mix in with your fingers and eat with your (please) right hand. Some raita yogurt at the end, tea, toss the banana leaf and voila! the perfect South Indian dining experience. Delicious, nutritious, balanced, sensual, ecological.
I was itching to play the maddalam again to see what I remembered. Lessons back then consisted of learning a spoken rhythm, playing it on the drum, recording my teacher playing, notating both the spoken and Western notation in a notebook after the lesson in my home and then practicing on my legs (I didn’t own a drum) whenever I could before the next lesson the next day—mostly on the bus. After two months, I had learned a 40- minute rhythmic composition which I then performed at my debut performance in a ceremony called Arenaytram, complete with ritual offerings to his teacher, a special dhoti dress and marks on my forehead. I did eventually order a maddalam and got it shipped to San Francisco, but there was no opportunity nor reason to continue playing as nobody in the U.S. performs Kathakali on a regular basis. The drum sat in my closet for years, than in the school cabinets, brought out occasionally to accompany a few pieces with the kids. But essentially, I had not played, listened to nor practiced what I had learned for over thirty years.
And then sat down and played Ganapati Kai, the homage to the elephant god Ganesh the player plays before officially performing. Then my first five exercises and then bits and pieces of the 40-minute piece. Narayanan was deeply impressed—and so was I! Not a homage to my talent, which is just below okay, but to the power of the oral method of musical transmission. It really sticks to the ribs, or more accurately, is burned permanently into the axons and dendrites of memory.
Already three miracles into the day—that I had reunited with my teacher, shared an authentic Indian meal with Kerala and Talia, played some of my old pieces—my heart nearly leaped from my chest when I heard the nearby horns and drums announcing a Pooram Festival. It was the one thing I wanted to see almost more than any other, not only because all our photos of that festival from years back were lost, but because we went to five or six of them and it never failed to excite me. So it turns out that this festival was literally around the corner in the temple. We rushed over, Narayanan pushed me to the front of the line, right next to the blasting kombu horns and with my camera in one hand and Flip in the other, tried to both document and immerse myself. The details too numerous for a Blog entry, but imagine six elephants with men on top with big pom-poms, some 10 maddalam drummers, another 10 timmela drummers, 2 idekka drummers, 15 cymbal players, 15 horn players playing through a 96-beat sequence that includes “trading 8’s” improvisations between the drummers and gets fast and more furious, with the onlookers waving their hands and shouting and the elephant dancers performing their routines and even the elephants waving their ears (really!) to the beat. Welcome to Pooram, a Hindu Festival to honor the birth of one of the thousands of gods. After it reaches its peak, they all process to a nearby village where a similar thing was going on and then join forces. You don’t see something like that every day. 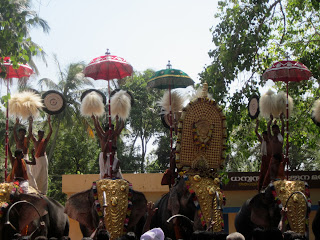 Walking back, he introduced me to one of the idekka players. This is a drum similar to the African talking drum, with strings that change the pitch by changing the tension. I asked if he would demonstrate and he invited us into his home and went through the whole process of assembling the drum. He let me try and smiled broadly when I managed to eke out some interesting rhythms. But like every instrument, the sticking technique was unique and not one you understand without the 10,000 hours of practice.
On to Narayanan’s house and we all sat outside on his balcony porch to get a view of other processions coming by. Each one from a different group with different instruments and costumes. And so in a world where music is increasingly relegated to recorded versions, background versions, formal study versions, the thing I loved about India way back when was still alive and well and worthy of my appreciation now. In the West, Barbara Ehrenreich has to write a book called “Dancing on the Streets” to remind us of what we’ve lost. In India, it’s still happening. 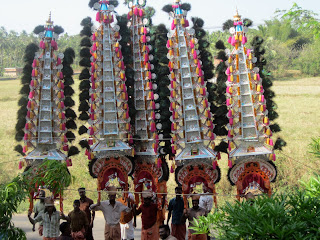 In-between processions, Narayanan showed me photos of his travels. By devoting himself to mastering one drum in one style, he has been able to travel the world sharing the glory of Kathakali—Japan, Indonesia, China, throughout Europe and the United States. (And apparently, once to San Francisco, but he didn’t know how to contact me.) Because of these travels, his English vocabulary jumped from five words in 1979 to some understandable conversation and it was a pleasure to finally get to talk a bit.
I asked him whether he had taught more Westerners after me and he said no, no one ever came by again and asked. I asked him why he accepted me as his student and he talked about how the right drum head of the maddalam was Shiva, the left, his wife, Parvati and when one played well, one generated some Shakti energy between the two. He thought that a man from San Francisco and a man from Kerala might create their own Shakti energy through the medium of the maddalam drum—and he was right.
He went on to say, “I’m 64 years old and still have good energy. Why? Because of art. A businessman or engineer doesn’t have the same kind of life force to renew them, but music keeps us alive and vibrant. And it doesn’t matter what kind of music. All art is one.”
His daughter Prasida, whom I had known briefly as a charming and cute three-year old, came with her son and daughter and more riches in sight. She danced a little Bharat Natyam that her mother had taught her and then her 8-year old daughter did the same—an unbroken line. The daughter also taught me a clapping game, her charming 12- year old brother (not to be outdone) sang us a song and it was time to take photos. Though I thought I would see Narayanan perform the next night (alas! it was not to be), we had our farewell moment when the moisture reached both our eyes. “I have dreamed of this moment for 32 years,” I told him, “and am so grateful that we could meet again. I understand that there are thousands of Hindu Gods—today, all of them were with us.”
And off we went back on the bus.
Posted by Doug Goodkin at 6:37 AM