October went out in a blaze of glory. A perfect day weatherwise and pretty darn good otherwise, with a powerful Intery Mintery celebration, fun Middle School booths and a pin-drop silent attention as I told the story of The Giant With No Heart in His Body. The kids in the room pictured the monstrous giant at the level just right for their psyche, the adults understood the reference to the heartless pathological narcissist unbelievably at the helm of our country’s leadership. From school, a lovely dinner at a Puerto Rican restaurant with the Interns and on to Belvedere Street for an always fabulous festive five blocks of trick or treating. As every year, I love sharing this holiday with folks from abroad, proof that we Americans still can still have fun, create magic, go crazy in the right way.

And so trick or treat. We’ve had almost a year now of being tricked by this scandalous and clueless and heartless administration and with the Muller investigations underway, the players in the game continuing to shoot themselves (and each other) in the foot, the public getting tired of the shenanigans, I have hope against hope that November will mark the beginning of the treat we deserve and so desperately need, the fairy tale ending where the bad guys get their just desserts and the marriage of heart and mind takes place. May it be so!

And if we are to take the above story to heart, be kind to ravens, salmon and wolves. If we are, they will help us find the egg with the hidden heart and do what is necessary. May it be so!

Posted by Doug Goodkin at 10:17 PM No comments:

In a discussion about the role of the teacher, I imagine most teachers might agree on the following:

1)    Our job is to teach children to think. To think critically armed with pertinent information and to develop the ability to arrive at their own conclusions.

2)    Our job is to teach children to care. About themselves, their classmates, their community and their country.

3)    Our job is to teach children to become future citizens who understand their rights and responsibilities in a democratic nation.

4)    Our job is to teach children to act on their convictions, as long as such action does no physical or mental harm to others.

So yesterday, when a child in Texas chose not to stand during the Pledge of Allegiance because he felt that

a)     we as a country were not living up to the Pledge and not supporting (or arresting or murdering) those who are actually working toward “liberty and justice for all.”

b)    it was his right to politely decline mouthing an oath of allegiance to a system that wasn’t working and had nothing directly to do with his education,

it seems to me that his teachers would not only accept his decision, but actively praise him for fulfilling all four of those goals above. And then choose to use his action as a springboard to deeper discussion that the whole class could benefit from. And that’s exactly what happened.

No, the teachers threatened to expel him, insulted him publicly, approved of his classmate’s harassment and now the child’s family is suing the school. Ain’t America great.

Sigh.
Posted by Doug Goodkin at 6:46 AM No comments:

This the off-the-top-of-my-head-many-fabulous-works-left-out list of notable masterworks by artists in many fields. And here I humbly offer my own most memorable work in the bizarre little world of Orff Schulwerk music education: Intery Mintery.

We had our dress rehearsal today, 100 children from 1st grade through 5th, each contributing their part of the whole. 1st graders with sound effects, 2nd graders playing the melody on Indonesian angklung, 3rd graders playing the driving pentatonic arrangement I composed, 5th graders playing organum-style melody on soprano and alto recorders and the 4th graders at the center of the whole show, being the dearly departed who get to come back to Earth for one wild night of revelry, dancing in choreographed abandon, accompanied by all the instruments plus Bulgarian bagpipe. It’s really a one-of-a-kind dramatic performance. A child-sized masterwork and if that’s how I’ll be remembered, that’s fine by me. 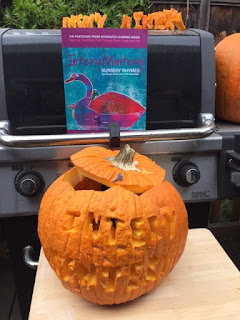 Posted by Doug Goodkin at 8:13 PM No comments:

Six old watches that don’t work. Three travel alarm clocks. Four golf tees and two golf balls. Small rocks from important places I don’t remember. Old political buttons: “Yes on 12.”  “Freeze Now.” “Mondale Ferraro.” Four key chains. A shoehorn. Jacks. A small flashlight. Two  jackknives. Eight pens. Some 50 blank postcards. Another 50 notes of appreciations from kids, parents and teachers. Two pairs of cufflinks. A few bandanas. A big bag of foreign coins. Another of foreign bills. Birthday cards from family and friends on the occasion of my 40th birthday. My Pro Merito Orff Award pin. My fake Pole-Vaulting medal that I never got in high school, but deserved, so some friends had one made—I think on my 40th birthday. A photo of me at Mt. Baldy Zen Center sitting next to Leonard Cohen. An autograph from Milt Jackson wishing me the “best of soul.” A letter I wrote to Gary Snyder (did I ever send it?).

This is what I unearthed in three of my desk drawers while looking for some hippie paraphernalia for my Halloween costume. The flotsam and jetson of a life, things with enough juju to not mindlessly throw away, but also stuffed into a drawer in a heap of chaos and largely neglected and forgotten.

But what a pleasure to sift through it again, not only to sort and organize and throw out some and put others in neater piles, but to live through all those former selves briefly, to remember.
Yes, we should “Be Here Now” and plan for tomorrow, but yesterday is a big part of the person who opens those drawers and it feels good to see which threads are constant, which got frayed, which need some patching, which can be let go.

Mind you, this was three desk drawers. Five more await in this desk, three more in other desks (including two drawers of pocket Memo books from the last 30 years with my “to-do lists” in them!) and then there’s my four filing cabinets awaiting, not to mention a basement of boxes with things like old letters, old Orff T-shirts, more paraphernalia. And don’t get me started on my cassette tape collection with me playing piano or giving a talk or recording the little kids telling stories. Then if I run out, there’s always the entire contents of my computer desktop.

I’m imagining the first three months of retirement as a thorough cleansing, purging, reorganizing and yes, still saving these little tokens of a human life wholly lived. (I was told that Carl Orff was a bit of a pack rat also, saving ticket stubs from trains and such). It’s going to be great!

But meanwhile, I think I’ll keep working.
Posted by Doug Goodkin at 7:45 AM No comments:

Michael Meade recently posted a piece about the abuse of authority in our time. Of course, it’s not an issue just for our time, it’s an age-old problem of all times and all places. People in politics are often those attracted to outer power and authority and get their pleasure from lording over someone else—or millions. That either leaves us compliant, obedient and silent (and thus complicit) when authority is abused or distrustful of all authority and rebelling like sullen teenagers whining about why they can’t have the car tonight.

But Meade suggests—and rightfully so, in my opinion—that true authority is linked to words like author and authentic. Author comes from the Latin augere, to augment, increase, originate, promote. It later shifted to auctor and then the Old French autor and finally the English author, one who originates stories or increases the discussion of ideas and promotes them being shared and spread. Authentic is about integrity, the real deal, the sense of having genuinely earned the privilege to share something that has been carefully cultivated, worked and re-worked. If someone in the position of authority has not done the necessary work to actually earn their standing through their deep understanding of the issues and their genuine desire to promote well-being and increase happiness and understanding (hmmmm. Anyone come to mind?), then authority is false and dangerous and right to be mistrusted. But no need to dismiss all authority, just hold its feet to the fire to be authentic and worthy of creating, of authoring something of value.

And so today. One of those moments of grace that occasionally comes to teachers. In this class, I was not frantically corralling the wild impulses of children, putting out small fires of inattention, redirecting with mild threats or enticing with motivating praise. While the 4th graders danced their way through our decades-old Intery Mintery Halloween ritual, I simply witnessed the beauty of their interpretation and allowed myself to feel the goosebumps. It was the real deal. It was authentic. And their subtle creations of shapes and ways of moving in characters in a simple choreography was their way of authoring beauty. That’s the kind of authority and power we want to awaken in our children. Who just might then become adults worthy of whatever outer authority they earn.

The 4th graders felt the power they released in the room today and I was happy to let them know I saw it and felt it and admired it. One of those rare moments of connection that we all may hold close in times of need.

Posted by Doug Goodkin at 1:51 PM No comments: