Happy Spring! I know you’re looking for the perfect way to celebrate the Vernal Equinox (yes, it's today). Summer Solstice has big bonfires and all-night revelry, Winter Solstice some light-returning rituals and dances involving swords and antlers, but the Equinoxes tend to be minor holidays in comparison. What to do?

Try this. Take a raw egg and see if you can balance it on its end (the thicker one) on a table or other flat surface. (No cheating with salt!!) According to some urban legend or ancient wisdom, the forces are aligned so that in the short window of the equinox, such a trick is possible. I did in the school kitchen today four times in a row and two other people did as well.
Being a 21st century researcher, of course I had to cross-check with Google. Sure enough, plenty of commentary, mostly skeptical. One said: "Apparently this derives from the notion that due to the sun's equidistant position between the poles of the earth at the time of the equinox, special gravitational forces apply." But then went on to question why it wouldn’t work at the autumnal equinox and then claimed (with photo “proof”) to have balanced an egg three weeks before the Equinox. And why eggs? Some suspicious connection with the Easter bunny (eggs?) and the Ascension (eggs?) and the whole convoluted history of ancient fertility rites hidden beneath the Christian overlays (yes, eggs). Add to that the claim that the Chinese (not traditionally Christians) first noted the raw egg balancing act and that there’s no obvious reason while equal nights and days would affect gravitational pull and there’s every reason to be suspicious. 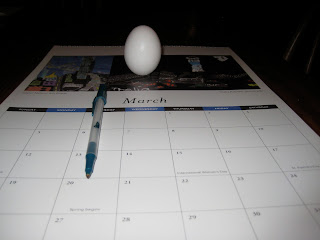 But why let mere facts spoil all the fun? Gather the friends or family around the table and get to work on the egg-balancing contest. In any event, it’s a challenge to balance it and a thrill to succeed. Just the kind of pointless activity that I love. Try it!
Posted by Doug Goodkin at 8:49 PM