My Life As an Onion 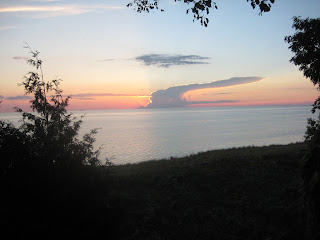 I was 24-years-old when I first came to this cottage on Lake Michigan. About to start my life as a teacher at The San Francisco School and the beginning of a life together with the woman soon (well, 4 years later) to be wife. Here I met my future in-laws and their friends, that older generation that were mostly around 50 years old. 50! Imagine that!

And here we came just about every summer since then. 41 years of sunsets over the lake, climbs up the giant dunes of Sugar Bowl or Baldy, daring dives into the cold front lake, long swims in the warmer back lake. The trips into the town of Frankfort, charming them and still charming now, e-mails at the library, raspberry picking, miniature golf and movies at the Cherry Bowl Drive-In Theater.

The cottage like Grand Hotel in the movie—“people come, people go, nothing ever changes.” And thank goodness to the Grand Traverse Land Conservatory for that, for protecting the area from the developers so that its beauty is preserved. The people change—we get older, we change, some die, some are born—but the land and water stay mostly the same. Of course, nature is never static and is constantly changing itself. Each year, the beach front is a different size (quite small these last few years), there are  less Petoskey stones, picked over by 4 decades of beachcombing, occasional epidemics of ladybugs and sometimes a disturbing amount of plastic washing ashore. But mostly, the sloping dunes and grand expanse of blue water and large skies out the front and the intimate woods out the back are pretty much as they have been.

So here we are again, granddaughter Zadie sleeping on the bunk where my daughter Kerala used to sleep, Malik splashing in the water at the outlet the way my daughter Talia used to. The old family friends in the cottage next door still here, only now all of us looking a bit flabby and loose-skinned and slower in our gait, some 15 years older than my in-laws Pam and Ted were when I first came here. And Pam and Ted are now just a photo on the refrigerator, Pam’s rug hookings on the walls, Ted’s fishing gear in the basement. This morning I shaved at the sink where my Dad shaved off my 10-year beard when I turned 30, the first and only time he and my Mom came here. My nephew Eren who used to get time-outs in the car as a naughty little boy picked me up at the airport, made lunch for everyone today, discussed politics with us, a 25-year old responsible young man with a job and car keys. The ghosts of the past are everywhere here, not the haunting kind, but the loving ones who stamped this place with their stories that still live amongst us as we carry it all on.

Coming to a familiar place once a year that doesn’t change much opens up a special sensitivity to our own personal changes— the comfort and familiarity combined with that sense of time passing and the very different face looking back from the mirror. The cycle of time—Kerala in the bunk and now Zadie, the old folks Pam and Ted now Karen and myself—gives a depth and poignancy to the moment.  All the layers of time together at once.

And that brings us to the onion. Sandra Cisneros:

What they don't understand about birthdays and what they never tell you is that when you're eleven, you're also ten, and nine, and eight, and seven, and six, and five, and four, and three, and two, and one. And when you wake up on you're eleventh birthday you expect to feel eleven, but you don't. You open your eyes and everything's just like yesterday, only it's today. And you don't feel eleven at all. You feel like you're still ten. And you are—underneath the year that makes you eleven.

Because the way you grow old is kind of like an onion or like the rings inside a tree trunk or like my little wooden dolls that fit one inside the other, each year inside the next one. That's how being eleven years old is.