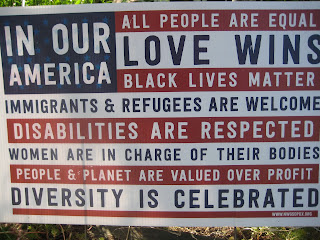 Very heartening to see these signs all over the block where my daughter, son-in-law and grandchildren live in Portland, Oregon. It means that their neighbors know how to think, how to be engaged citizens, how to care beyond selfish. But also strange that such signs are seen as radical statements. Since when is it radical to simply be a decent human being? Since when are the basic tenets of American democracy seen as threatening left-wing politics? So an imaginary conversation with an American voter who disagrees with these simple statements:

All People Are Equal: Read the opening lines to The Declaration of Independence. That’s the country you signed up for.

Love Wins: Would you prefer that Hate Wins? If so, why? And what happened to you that this became your worldview? Please get help or consider another planet.

Black Lives Matter: Are you going to tell me that my grandchildren’s lives don’t matter? Explain.

Immigrants and Refugees are Welcome: Unless you’re Native American or black, that’s why you’re here. If you disagree, then the idea of a ban should be retroactive and you will have to be deported.

Disabilities Are Respected: When you were a little kid meeting a person radically different from you for the first time, I can imagine your confusion. You might have been worried that could happen to you or were simply uncomfortable with something you didn’t understand. So your first impulse, especially if you were with a group of other kids, might be to make fun. Understandable at 8 years old, inexcusable as an adult. Grow up.

Women Are in Charge of Their Bodies: If you think that men get to decide about issues concerning women’s bodies, then seems only fair that women should be in charge of our bodies. They can decide the Prostate Cancer is a pre-existing condition and deny affordable treatment or make men apply (to an all-women committee) for Viagra.

People and Planet Are Valued Over Profits. In your dog-eat-dog survivalist mentality, your profits earned from privilege buy you an extra couple of days when the climate-changed waters rise and your house is on the top of the hill. That’s it. How about turning your thinking toward reversing the impending catastrophe and starting to treat neighbors as if they might be willing to share their food and water in times of crisis because you were kind and considerate?

Diversity Is Celebrated: Read your dollar bill with the original motto: “E Pluribus Unum.” I know you have no idea what Latin is never mind understand how to read it, but it means, “Out of many, one.” It does not say, “Out of one, one.” Or “Away with the many!” It begins from diversity and affirms a common purpose from that base—creating a just, sustainable and democratic society where all of the above are affirmed and lived.

It’s a symptom of our failure that the sign begins with “In Our America,” as if there could exist another America in which the opposite values are celebrated. But then it wouldn’t be America, would it?
Posted by Doug Goodkin at 10:20 AM