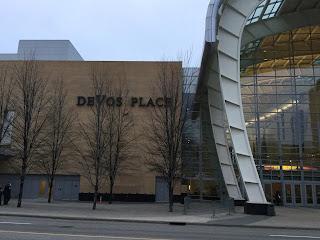 A friend on Facebook was recently lamenting that he was feeling more miscommunication with both friends and strangers living under this new authoritarian government. And so the question comes up:  How to maintain a civil discourse and respectful interactions in a time when civility from our leaders has descended to the swamp level and every day goes lower? How to keep the needed level of outrage without it leaking into personal relationship and our own psychological health?

Yesterday I gave a one-day Orff workshop at a Conference that was mostly held in the DeVos Conference Center in Grand Rapids, Michigan. A building named for a person who had money and was put in charge of the souls of our children simply because she was rich. I was here to help music teachers improve their teaching and while some of that meant the details of creating fun, inspiring and musically satisfying activities, the greater mission for me always is to help them to remember what their real job is. To give their children the opportunities discover and reveal the beauty inside them waiting to be released, to see their children, to know them, to praise and bless them. And thus, to love them. Children who are seen, known, honored, respected, valued, praised, blessed and loved are children who feel welcomed and now have the possibilities to see, know, praise, bless and love their fellow students. Children who are firm in their sense of belonging have no need to harm, insult, dismiss, ignore, disdain others, have the possibility of growing to be the future citizens we need, people firm in their sense of belonging who have both the curiosity and generosity to invite people different from them into that belonging. And by belonging I mean a proper belonging  where you don’t have to check your thoughts, feelings, religious beliefs, sexual identity, etc. at the door to be allowed into the gang, country club, good ole boys club, etc.

But right next door to where I was teaching was a building named for a woman who supports giving taxpayer’s money to a public charter “Christian” school in Indiana that explicitly forbids children with any connection to gay or bi-sexual people (ie, themselves or their parents) from attending their school. A woman who has no qualifications whatever to weigh in on effective education besides her big money background and her willingness to rubber-stamp the Conservative agenda (Conservative as in conserving white privilege and big money privilege and heterosexual privilege and etc.) and is now actively seeking to reduce funding for arts programs and such. How to express proper outrage over this betrayal of our children’s needs while maintaining civility?

Well, that’s my challenge in my workshops. I’m not there to push my views and my first job is to offer great musical material (the what), a dynamic process of presenting and developing the material (the how) and the food-for-thought about the big pedagogical ideas behind it all (the why). I take that seriously and believe I do it well. But interlaced with the activities are the comments and yes, sometimes making the connection with the current political scene without being too overt.

For example, in demonstrating music’s unique demand that voices, rhythms, text, dynamics, etc. blend into a unified whole and the beauty of feeling a small part of something larger and wondrous, I also show how one person has the power to bring down 100 people if they don’t align themselves with the community task. So I ask everyone to sing Twinkle Little Star and miraculously, if you think about it, they all sing in the same key at the same time with the same text with blended voices. They then sing again and I sing out-of-tune and what was once beautiful suddenly is not. One person can do that. Next time I sing at a different tempo. Same effect. Next time with a different text. Also. Next time I sing very loudly so my voice dominates the others (and even more so because I have the power to hold a microphone) and comment,” You see how in this case, I was like a big bully thinking my voice was more important than yours and ruining the feeling in the room by make it all about me, me, me.  Like someone pushing someone else out of the way to get his photo taken.” A few giggles from those who remembered Trump pushing aside the Prime Minister of Montenegro at the photo shoot. That’s the kind of political comments I make, so people can see that act from the Twinkle Little Star point of view.

But I was in Michigan after all, a state the disappointed me (and so many others) in the 2016 election, and I wasn’t feeling the same kind of energy coming back to me that I did the week before in Oregon.  Should I shut up? Heck no!! But I did need to win over their hearts and minds, first and foremost from treating them as I treat the children, giving them the opportunities to express themselves beyond the norm and feel valued and welcomed and surprised by their own beauty. As the afternoon went on, I could feel that happening and by the time we ended with the stirring Build Me a Mountain song, I felt them singing with great passion my verse “Gonna speak some truth here, from a lot of lies. Gonna speak some truth here, so we all can rise…” Yeah!

And then ended with some final words:

At the end of the day, it’s not about this group versus that group, the constant squabble between political parties, religious groups, ethnic groups, etc. It’s about what we need to do to make it on this planet, how to be together to not only survive, but to thrive. And as people who were called by the noble profession of teaching, I believe you signed up to believe in the promise of young children and how to bring them into their best selves, slowly, with patience and long years of believing in who they are. Next time you hear of a decision being made or a policy proposed, think of your children, visualize their faces, imagine how they would vote. They don’t have the power to weigh in on the conversation about their own future and they’re depending upon us to speak on their behalf. Let’s take that seriously.

So that's my version of Civil Outrage. What's yours?
Posted by Doug Goodkin at 6:56 AM