Back where we began, waiting for the bus at the traffic-jammed corner. Then it was an arrival to an unknown six days, now a departure with the echo of the moon shining over the nighttime waters, beautifully silent with insect trill, the sun lighting up the cliff-clinging house of Positano below.

Back from the beach yesterday to a quiet afternoon, final dinner at our little restaurant—homemade ravioli, insalata mixta with radicchio, rucola and more for a mere 3 Euros (tip: should you eat here, don’t get the green salad—it’s iceberg lettuce). Fond farewell to our waiter and over to the Festival at the nearby church. It was a full day homage to the Virgin Mary and by the time we arrived, she was taken out of the church and serenaded by a marching band. Interesting combination. Then taken back in the church while the hired Pop band took the stage, complete with synthesizer, inaudible congas, accordion and two “Go-Go girls” clad in tight gold sequin dresses doing loosely choreographed dance steps to pretty bad music. Wondering whether the Virgin Mary requested them. (Earlier in the day, I heard some of Charlie Parker’s Moose the Mooch on the keyboard and wondered if this was the same player and if so, how could he stand playing this other stuff? Of course, I’m sure the answer is— money. Though I think the Virgin Mary might dig Bird.)

We left early on, but the music followed us to our room and then moved on to a comedian with a loud microphone, followed by midnight fireworks over the rooftop. Up the next morning too early to the raucous call of roosters, buzzing flies and a non-stop barking dog that surely would be dead if I was a member of the NRA. A final breakfast and farewell to our warm-hearted hosts, Salvadore and Carmela, lug the suitcases up the stairs, catch the bus and then wait for the next. (See opening sentence.) It did come, we did get on, we did get on the train to Pompei, we did get to leave our luggage (for free) at the Pompei gates and now in the heat of the mid-day sun, in we went to be real tourists and educate ourselves about the volcano-destroyed town of Pompei. AD 79, I believe.

Rick Steves’ xeroxed pages in hand, we passed up both the live guides and the audio tour and set about going from number to number. There was City Hall, there the bakery, their the fast food joint, there the rich man’s villa, there the gym and hot tub, there the brothel (with erotic frescoes above the small rooms with stone slab beds). Rick’s punch line is that though it was almost 2,000 years ago, the folks pretty much lived like we do—eating, drinking, socializing, sporting, figuring out traffic patterns, even with running water from the ingenious aqueducts (though I think they hadn’t arrived at flush toilets yet). They had no idea that this distant mountain was an active volcano and even if they had, probably would have kept on like we do in San Francisco; “Let’s hope for the best.”

Coming to the end of Rick’s pages, we followed our nose down to the end of one avenue and came upon a path flanked by tall cypress trees and a Coliseum overgrown with grass.
Not sure whether this is where the Christians-to-the-lions entertainment happened, but seems possible. From there to some benches under shaded trees and after two hours of touring around the stone streets with the bricked buildings and nary a plant in sight, it felt like arriving in the Catskills from downtown Manhattan. We had emerged from ancient ruins into contemporary life with flowers, trees, grass, shade and a welcome breeze that was reviving beyond description. The kind of small blessed moments the weary-traveler appreciates like the backpacker savors Spam in a pan.

Finally, the train into Naples, a cab to the Kleopatra Hotel with a picture of Liz Taylor (serendipitous because of the book Beautiful Ruins I read here— highly recommended, by the way), an evening ahead before a brutal 4:30 awakening. Having read this far, it’s time to reward you with the punch line of the title. What advice does Pompeii hold for us?

3. The secret to happiness is to balance fertility with money. As demonstrated in the photo below. (Yes, that’s a sack of money on a scale balanced with an erect penis over a bowl of fruit and that was the explanation. The three lower chakras summarized in one image—Food. Sex. Power.) Those crazy Pompeiians!! 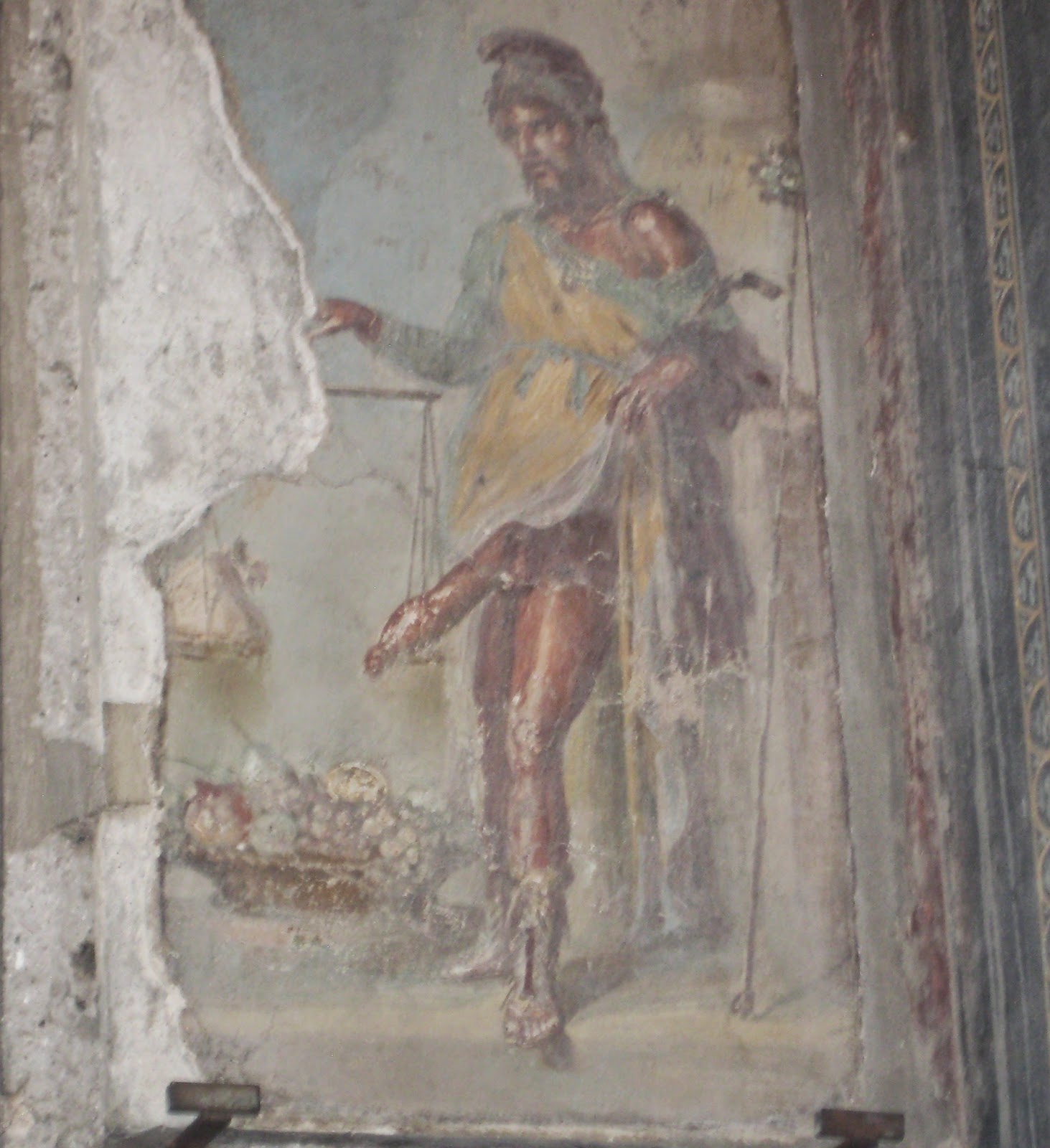