No Tourists in Positano

“Positano bites deep. It is a dream place that isn’t quite real when you are there and becomes beckoningly real after you have gone. Its houses climb a hill so steep it would be a cliff except that stairs are cut in it. I believe that whereas most house foundations are vertical, in Positano they are horizontal. The small curving bay of unbelievably blue and green water laps gently on a beach of small pebbles. There is only one narrow street and it does not come down to the water. Everything else is stairs, some of them as steep as ladders. You do not walk to visit a friend, you either climb or slide.

Nearly always when you find a place as beautiful as Positano, your impulse is to conceal it. You think, ‘If I tell, it will be crowded with tourists and they will ruin it, turn it into a honky-tonk and then the local people will get touristy and there’s your lovely place gone to hell.’ There isn’t the slightest chance of this in Positano….”

John Steinbeck wrote that in 1953. (Published in Harper’s Bazaar, the full article—well-worth reading— is available online.) Soon after, enticed by his description, tourists started coming to Positano. Lots of them. If Steinbeck were alive today, 60 some years later, he would have to sit down to a banquet and eat his own words— at tourist prices. The narrow streets of Positano are filled to the brim with hotels, tourist shops and yes, tourists. Lots of them.

As to whether the locals have sold their souls to tourism, hard to tell. They seem happy enough to be doing a thriving business and I’m sure that off-season, there’s plenty of time on hand to revive the pre-tourist Positano, filled with lots of local character and characters, a colorful history and a large family feeling. I hope that’s as true in 2014 as it was in 1953, but who knows? The world has changed quite a bit since then, a lot of character flattened out in both people and places and much history unknown to the i-Padded Now Generation.

And yet I would say Steinbeck got part of it right. If ever a town had an architectural character unsullied by modern ugliness, Positano (and Santorini) would be at the top of my list. The stores are not McDonald’s, Walgreens or Starbucks, but exquisite Italian ceramics, chic clothing and linens that further define the Amalfi coast character. The restaurants are not Thai or California cuisine, but pastas, pizzas, calamari, grilled vegetables and salads that have this greens-hungry traveler in heaven. Desserts are not Ben and Jerry’s or apple pies, but exquisite (and omnipresent) gelatos and lemon slushes. In short, local ingredients, local art forms, local character made by local characters. Yes, tourists, tourist, tourists, but Positano seems to have absorbed them on its own terms. And as we discovered on our Path of the Gods hike, many of the tourists are Italian. That’s a good sign.

And there are some built-in defenses against too many tourists running rampant and running and ruining the show. There are many beautiful villas to stay in up in Nocelle where we are, but to get here requires either the 1800 stair ascent, the 3-mile uphill hike on the road or taking your chances with erratic public buses that may or may not have room for you and your luggage, and drivers that make no apologies to irate tourists if they think they’re too full to stop. The bus costs 1.50 Euros, a taxi 30 Euros— another obstacle to easy access. I think that discourages a certain breed of tourist and calls for some flexible and hearty travelers.

Today, we took a boat to the town of Amalfi. Of course, in a weird pattern, the moment we stepped on the boat, it began to rain. But most of the rains seem a bit ADD, with a short attention span of about five minutes. So halfway to Amalfi, we emerged on the top deck and admired the continuous exquisitely sculptured towns built into the cliffsides. In Amalfi itself, we took a stroll up to the Byzantine church, a walk through the town, a lunch of fried calamari in a paper cone and then decided to bus back.

Again, tourists beware! The buses are a bit of chaos, folks lined up where they think the bus will come, then piling on and everyone seated, only to discover that the bus driver decided he’s not going to Sorrento and Positano (or perhaps never was) and everyone piles off again. Only now it’s raining and hard and for more than the usual 5 minutes and the crowd is thickening and despite British tourists in the mix, there is no formal queue and everyone is clumped at the door struggling and pushing to get on. Even if, for the second time, it turns out to be the wrong bus and they pile out again.

Like I said, tourism on its own terms. Finally managed to get standing room on the right bus, rode back along the coast on the winding roads through the stone tunnels, often inches between the wall or the bus coming the other way. Got off at the place where we first entered Positano and knowing that we might wait an hour for the local bus to come and pass us by, started walking up the three-mile road back to our place. A better choice anyway, immediately lifted from the chaos into the silence that is everywhere here and keeping the exercise marathon going unbroken. Past some now familiar sights— the house with the Snow White and the 7 Dwarves Statues, the church, the tennis courts, the large cliff with a hole in it. Late afternoon coffee in the small town of Monte Pertuso, the scene we’ve seen so often before in Italy or Spain or France— everyone out in the public square, kids running around playing, families strolling, teens flirting, old folks chatting on benches, life as it mostly has been lived everywhere on the planet before TV’s, air-conditioning, suburbs and shopping malls. I love it.

Yes, John Steinbeck, you got it right. Positano bites deep and its dream is the kind of reality we all could use more of. I suppose that’s why we travelers have come, to re-kindle those lost selves buried in the busyness and efficiency and hyper-speed and noise and ugliness of so much contemporary life. I can testify— it’s working. 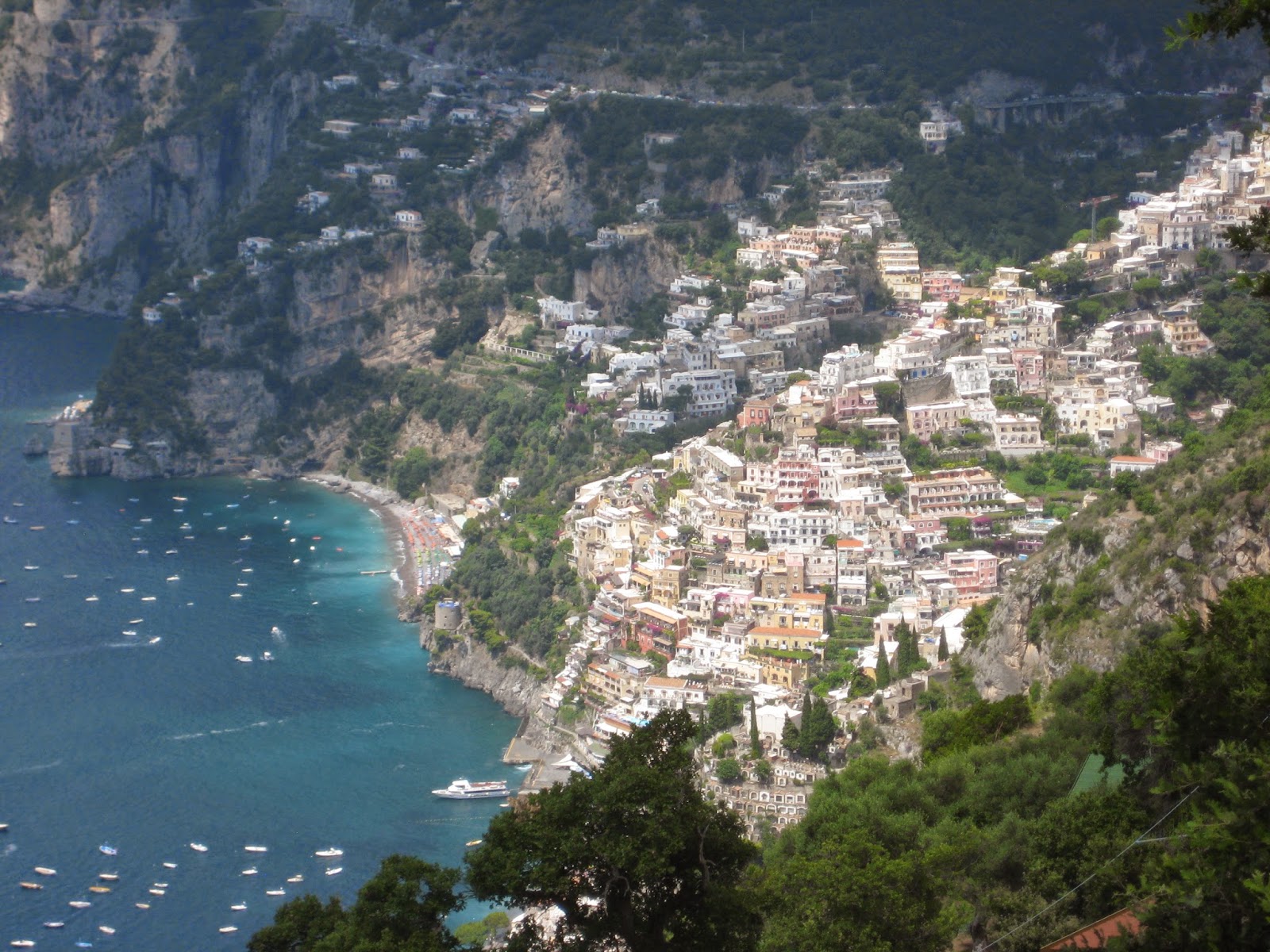