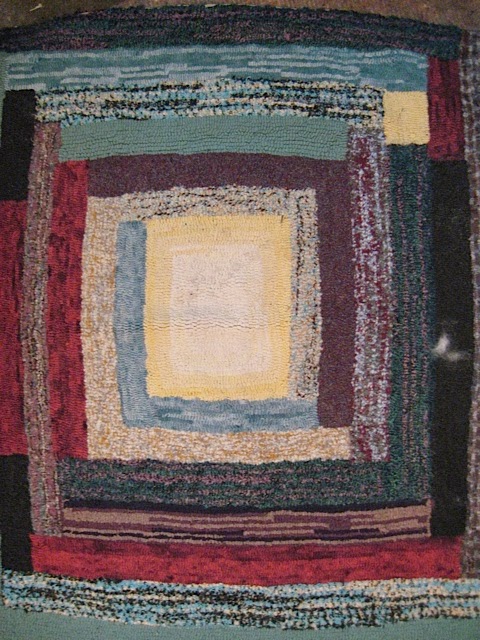 "Honor thy father and mother" says the first commandment and my wife and two brother-in-laws passed that test today. A party six months in the planning and it all came together beautifully. A crisp sweater-weather day, Fall’s final colors lit by an afternoon sun and friends and family gathering from all corners of the country to honor my mother-in-law, Pam Shultz, by organizing an art show with some 46 of her rug hookings brought together for the first time in one space. It was mildly connected with Pam’s 90th birthday coming up in January, which makes it all the more poignant that it’s never too late to make your art world debut.

Some 90 or so friends and families from all corners of Pam’s life joined together to ooh and aah at the exhibit and chat with the artist, as well as enjoy the fabulous catered food and reunite with each other. About midway through, my wife gave a lovely talk honoring her mother, followed by two friends talking about other admirable parts of Pam’s long and varied life— as special education teacher, nature lover, devoted grandmother and more. For once, I had no formal role to play as a speaker in the event, but after seeing the artwork, I just couldn’t resist and gave an impromptu talk. And so here it is:

You might be impressed that someone would travel a long distance to honor his mother-in-law. And more impressed yet that I came from San Francisco and gave up my box seats to the Giants World Series game to do so!!!! No, just kidding. But my devotion is not too far short of that mark. Especially after what I’ve seen here today.

The other day, I took a multiple-intelligences test and each one was ranked between 1 and 15. As a music teacher and author, it’s no surprise that I scored 15 in musical and linguistic intelligence, but even I was shocked by my lowest score— 4 on visual-spatial skills. That means that when I was looking at these rug hookings and told my wife that one looked really familiar, she sighed and said, “Yeah, it’s been hanging in our house for 15 years.” That gives you an idea about how fatally stupid I am about art.

I’ve known Pam for some 40 years now, mostly spending time together in that fabulous paradise of a cottage on Lake Michigan. And night after night there, I’ve often noticed Pam bent over a piece of fabric doing some kind of stitchery. But because of my cognitive disability, I’ve rarely expressed curiosity or asked her to show me what she’s working on.

But today, as I saw piece after piece and really looked at them and notice the fine details and admired the colors and the shapes and forms and the variety between pieces, my admiration for Pam zoomed beyond its customary high mark. These were beautiful! How could I have missed it? And how humble she’s been about her artist’s soul, just quietly going about her work and producing works borne from great patience, attention and some inner need to express beauty. It takes my breath away.

So, Pam, forgive me for taking so long to notice but today, I did and I couldn’t be more proud to have you for my mother-in-law. Congratulations!

After three hours of holding court, Pam looked exhausted so we whisked her away back to her Assisted-Living Home. I parked the car and checked in at the front desk with flowers in one hand and her oxygen tank in the other and the woman there said, “Oxygen and flowers. The two things we need most!” Well, I believe that’s true.

And one more. Family and friends who take the time to celebrate those who have beautified this world. Kudos to Karen, Barclay and John for honoring their mother and to Pam for her lifelong work.