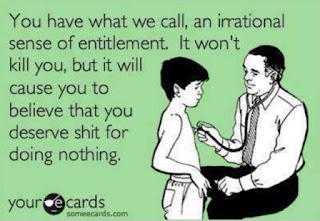 May I recommend a book? It’s titled Somebodies and Nobodies: Overcoming the Abuse of Rank by Robert W. Fuller. Published in 2004, it’s a sleeper of an idea whose time is overdue, but didn’t seem to hit the nerve center of the national dialogue and become a New York Times National Bestseller.

But it's not too late. In the face of looking again at white supremacy, from it’s recent extreme version in Charleston to the insidious more subtle forms (see cartoon above) permeating every corner of our culture, it’s an idea worthy of consideration. My daughter Talia had papers posted on her 4th grade classroom wall with titles like Racism, Sexism, Ageism, Homophobia, Ableism, Classism and more. When her students came across examples of these in the news or books they were reading or in their daily life at school, they would put a Post-it describing it on the appropriate paper. As Fuller says:

"Unnamed, things can continue to debilitate, damage and destroy; named, we can begin to unravel its pathology and take steps to protect ourselves. …Once you have a name for it, you see it everywhere."

But is there something deeper that unites all these isms? Some common element that is consistent in each, one thing that can enter our conscious awareness to begin a proper healing and begin to turn the whole catastrophe around? After all, blacks can be homophobic, gay people can be racist, poor people can be sexist and all possible combinations of each ism. What is the core part of us that generates and perpetuates these malignant ideologies? That is precisely the question Fuller is trying to answer in his book. And he does. He calls it Rankism. In his own words:

“…Rankism isn’t just another ism. It subsumes the familiar dishonorable isms. It’s the mother of them all. …Attacking the familiar isms, one at a time, is like lopping heads off the Hydra of discrimination and oppression; going after rankism aims to drive a stake through the Hydra’s heart.”  (pp 5/7)

In short, rankism is abusing power, either earned or granted, to become a “somebody” by making others a “nobody.” It strips both individual and whole groups of dignity and equal rights, perpetuates limiting stereotypes and ultimately, hurts the “somebody” as well through a false sense of achievement and self-worth (again, see cartoon above). It’s what kept and keeps poor whites abused by the entitled rich from banding together with poor blacks, through a clever game of convincing them they’re one rank above their darker-skinned brothers and sisters. It’s what still keeps voters voting for candidates against their own self-interest. “Yes, we’ll close down your farm and wipe out your small town’s center for our own profit, but by voting for us, you can join our club of straight people superior to gays.”

Fuller’s “Rankism” is not yet another simplistic dragon to be slayed. There are many layers for it, but as with everything, naming it, investigating its nuances, recognizing it, are the first steps to overcoming it.  A few key notions:

• The need for hierarchy and rank in human culture is as natural as in the animal kingdom.
Rank earned through effort and talent is an essential component of a harmonious community.

• As such, the solution is not to attempt to abolish rank, but to keep it from being used to “abuse, humiliate, exploit and subjugate." (Fuller: p. 4)

• Rank is mutable. “You can be taken for a nobody one day and for a somebody the next. You can be a nobody at home and a somebody at work, or vice versa.”

• Like all our human strengths and frailities, awareness of our tendency to bully or kick the dog or build our identity by putting down others is a first step out of our baser impulses towards a more accepting, compassionate and understanding self.

• We are all “rankists.” We all have capability of being less rankist—and thus, less racist, less sexist, less homophobic, less ageist and so on.

• Schools are the place where children can be educated to value the worth and dignity of every living being. And yet schools continue to be places of intense ranking, from teacher to student, from student to student, from government to whole schools.

Following yesterday’s blog, I wish I was more of a “somebody” in the national discourse so these ideas could be heard further than this blog. Who wants to listen to an elementary school music teacher? But even a “nobody” can contribute. And Fuller, one-time physics professor at Columbia and later President of Oberlin College, has the necessary status to be listened to. But only if you buy and read his book! Consider it.
Posted by Doug Goodkin at 8:55 AM