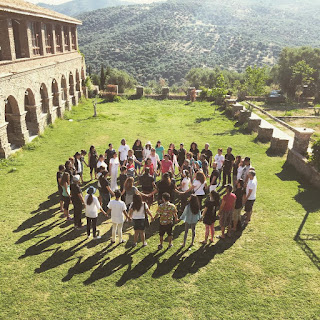 Perched on cushions under a canopy of fig trees, the sun setting over the hill and the town of Sirincé spread below bathed in soft twilight. Oz Garden restaurant, to be exact, alone and happily so after the intense social life of summer camp. Don’t get me wrong— I love it and loved it, this gathering with 50 beautiful souls for the usual playing, singing and dancing mixed with communal meals and casual conversations on the lawn and a circle of folks aiming for the group volleyball record of 37 consecutive hits. This the happy childhood of summer camps I never had and it suits me well. But also a blessing to have a moment of solitude at the end of a busy and fruitful time. Spinach crepe, chicken kabob, fresh salad and cold beer on the way and a cool breeze after the dry heat of a Turkish summer day.

True to form, I thought about how to wrap up the themes of this extraordinary community of people from Turkey and Iran, with a German (my former Orff student Katrin), American (me) and Brazilian (my colleague Estevao) thrown into the mix. How to bring the experience of Circle Camp full circle. We began by reviewing Estevao’s and Ezo’s classes and then I told the story of my teacher Avon, how we moved from teacher-student to colleagues and how he charged me with carrying his work forward. Told them how I’m always looking for the next bright spirit to do the same and here were two of them right by my side (Estevao and Ezo). What a pleasure it gave me knowing that they were doing some fine work and would continue beyond me. And at the same time, letting everyone know I’m not ready to give it up yet! Keep hiring me!

And then the main body of my talk (coming next blog), the way I try to tie up the separate threads of the six days to a few key images that frame the occasion, give language to the meanings felt in the body and heart and mind. Like the archer who hits a bulls-eye by seeing clearly where the arrow hit the side of the barn and then drawing a target around it.

My talk was slow by necessity, needing to be translated into both Turkish and Farsi. But it put some space around the words to give folks a chance to let them penetrate and mull them over. It was especially odd to read the translations of the poets Rumi and Hafiz in English, both of whom wrote in Farsi, and then have them re-translated back into Farsi (and Turkish). But since Rumi was born in the Persian Empire (the specific town now in Afghanistan) and Hafiz was from Shiraz, the town where some 18 students came from, it felt like a good choice, yes?

The talk ended, as such ones should, with a song, the tones and rhythms carrying the thoughts and feelings beyond where words can go, a three-part song at that from South Africa that carried such power. Once the parts were rolling, I shook hands with the first person in the circle, then I shook hands with the second, moved on to the third and the first followed me to shake the second. And so on. By the end, everyone gets to make contact with everyone, all the while singing. As I got to certain people, the small sobs began, and for others as well, setting off a mirror neuron festival of tears. But one must be careful, because it’s hard to sing and cry!

At the end, we’re back in a circle (by now ten minutes later) for the final notes. A moment’s silence and one of my signature ends: “Uh-uh.” “Uh-huh.” “Oh yeah.” “Oh yeah.” “All right.” “All right.”… Dramatic pause here. The next phrase is usually “Once more” and we were all feeling it. “Yes, please!” But for now, it was “That’s all.” “That’s all.” And then the free-for-all hugs and more tears.

Enticing beginning. Connected middle. Satisfying end. That’s both my definition of what music is and my mantra for creating dynamic and musical music classes. But it also applies to the whole arc of a training course and indeed, for a whole life as possible. But since it’s so difficult in real life, we enjoy it where and when we can.

It was a beautiful end to a beautiful week. And now for the next turn of the circle.
Posted by Doug Goodkin at 10:42 PM