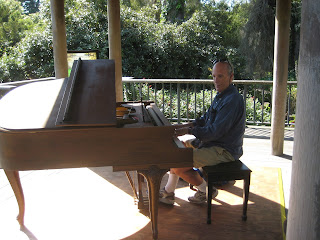 What you put in front of children matters. Maria Montessori based an entire pedagogy on that idea, giving children a “prepared environment” with carefully selected materials designed to meet their curiosity and develop their intelligence. One of the ways adults take responsibility to raise children is to create an environment that indeed raises them beyond their lowest levels of mere sensation and frivolous entertainment. That means saying yes to some things and no to others. TV, for example. Or nowadays, screens in general. Kids I know who were raised without or with minimal television may have complained some along the way, but I haven’t met a single one that wasn’t ultimately grateful for the way it cultivated their imagination and led them to some disciplined investigation, be it practicing music or reading voraciously or doing home-grown science experiments.

As with kids, so with adults. Furnish hotel rooms with large-screen TV’s, mirrors, phones and bad reading lights and you can guess how that night will go. In the same room, ditch the TV, put in a bookshelf of great books, great reading lights and a ukulele and the adults will complain until they start browsing or strumming a few chords and then be so grateful. In the restaurant, arrange tables so people have to share them, introduce the Japanese custom of pouring your neighbor’s beer and keeping an eye on it for a refill and you have yourself a very different social situation.

It’s really a simple formula. Things that stimulate the imagination, draw people together, encourage conversation between strangers, offer a moment of quiet or lively appreciation, are both shapers and reflectors of a healthy culture. And so twelve pianos.

Putting pianos in parks that anyone can sit down and play. It’s an international phenomena that came to my neighborhood yesterday. In the Arboretum, there are 12 pianos spread out amongst the New Zealand or California or South African plants and they’re not bad pianos either. Yesterday in the midst of a drought and our dry season, it sprinkled rain—not an auspicious beginning. But today, the sun came out and I went to check out. There was a man playing some decent ragtime on a white piano on the grass. He let me sit down and try my hand and within a half-an-hour, I improvised some blues with 6 eager kids, played a short duet with him and accompanied a singer doing a Gershwin tune. See what I mean? People of all ages and backgrounds gathered around with smiling faces and the world was refreshed.

I had to rush to an appointment, but I rushed even faster to get back and went to another piano under a roofed gazebo. Higher quality sound, both the piano and acoustics (see photo above) and this crowd was mostly parents with babies. I played for over an hour— ragtime, blues, jazz, Bach, Chopin, variations on “Twinkle Little Star” for the babies, Brahms lullaby when one was getting sleepy. Hey, this gig was meant for me! With 40 years of experience with kids, 7 years playing at The Jewish Home for the Aged, 58 years of playing piano and a memorized jazz and classical repertoire under my fingers, I was ready for anything!

My only complaint? They’ll be there for a week, exactly the week I’ll be gone! I think I can squeeze one more session in next Sunday. But too short! Why not just keep one there all year?
Kudos to the folks who generated the idea and those who followed through. It’s a beautiful example of how a simple act can generate a feeling of togetherness and shared happiness. I wonder if more kids will be begging their parents for piano lessons.

I’m off to Estes Park in Colorado for a family reunion. Who knows? Maybe we’ll hike up Longs Peak and find a piano up there!
Posted by Doug Goodkin at 10:23 PM