Saw the movie 45 yesterday, which proceeds at such a glacial pace that it makes Downton Abbey seem like Mission Impossible. Friends, if my life crumbles to a toddering halt where conversation is reduced to painfully slow one-liners at the level of “pass the salt,” please take me to the vet and have me put down.

But speaking of Downton Abbey, wasn’t that a fine fairy tale ending? Everyone gets married and lives happily ever after. Politically incorrect and in the real world, marriage is more the beginning of the story than the end, but hey, I was happy. Hard to say goodbye to these characters that worked their way into our hearts, even Thomas who was so skillfully redeemed and Mary who finally started to smile a bit again and poor struggling Edith finally getting her fair measure of happiness. I’ll miss them all.

And speaking of missing, had a painful farewell to my faithful car of 24 years, our Toyota Camry’89 station wagon (which we bought in ’92) with some 260,000 miles. Fed up with its first signs of decline this past Fall and committed to getting air bags, my wife finally bought our first new car, a Toyota Prius. It has a better sound system and better mileage and doesn’t shake while idling at intersections, but between being new and there being 10,000 other cars in San Francisco exactly the same (down to the light green color), it has nowhere near the character of the old station wagon.

“Does a dog have Buddha nature?” an old Zen koan and I could equally inquire “Does a car have a soul?” Well, we know it’s just a collection of metal pieces, but we drove to school every (school) day these past few decades with our children starting with them being 8 and 12 all the way to this Fall with the long-ago 8-year old in the back seat as a fellow teacher and the long-ago 12-year old driving her own children when she came to visit this December. The windows with their school stickers—San Francisco School, Lick-Wilmerding, Brown University, Tufts University—proclaiming our allegiance to education, the ski rack on top rarely used, the bike rack that fit so neatly on back, the fold-down back seat to carry Orff instruments, the dent in the side. Character.

I held on to it for awhile, negotiating street parking and such, but when I went to Australia, had to park it at a friends house in the country an hour away. When I returned, my sister went to drive it back to me and it wouldn’t start. No time in my busy schedule to try it myself or get it towed and fixed, so finally just called the car donation place and had them get it. No time to say one last goodbye. I’m sad about that.

But if there’s one lesson in living so long, it’s the art of saying goodbye. 41 years at the same school means 41 Junes bidding farewells to our graduates, their parents, all the teachers who move on. So many people who you think “How can I go on without……?” and you feel the full sorrow of the change and then discover that you do go on and life continues to unfold without that particular presence. And now others have come to take that place, others who you again will say goodbye to. And the punch line is not to adapt some cool detachment and stop caring, but to care yet more deeply and say your goodbye properly. Then wake up the next morning and carry on.

So Downton Abbey, old faithful Toyota, Ben from the Jewish Home, thanks for all you have given to me. It has been a joyful ride and now I come to the next turn in the road. In my Prius. 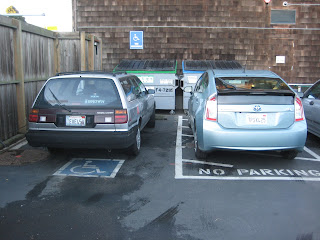