Are you ready, oh armchair traveler, to take a little trip? Settle in, it's a long entry. And just so you know, I could say, “Be grateful you’re in your comfy chair, because this place is beastly hot, crawling with bugs and pesky mosquitoes, the food is far below your average San Francisco restaurant, the buses are crowded and filled with chickens and the hotel rooms dirty with dubious electricity and running water.”

But none of that is true. The weather has actually been lovely, a lot of overcast days to protect us from the sun and when the sun has come out, the Ghanaians, seem to understand the blessing of shade trees and there are plenty in all the outdoor performance areas we’ve gone to. I haven’t once put on sunscreen nor bug repellent. Fact is (knock on wood) I haven’t felt a single mosquito. The food is not only fine, but is really growing on me. Things like Jolof rice, banke, a dish made from corn flour topped with wonderful vegetables cooked in a kind of tomato sauce, fresh mangoes and pineapples and more. The buses may be crowded with the proverbial chickens, but for long trips, we have our own so haven’t had to use the others. And the hotel rooms at the White Dove Hotel are basic, clean and cool with ceiling fans (and air conditioning if you like that). Yes, occasionally the electricity goes off or the water doesn’t run, but neither for very long. And now they have an Internet service that works!

So please enjoy your armchair travel in the comfort of your home, but if I were you, I’d put Ghana on your bucket list. Because none of it’s true power can be captured in words. You just need to be physically present to feel the vibrations of the music and feel the ground shake as the drums boom and dancers dance. And you can feel a little of the beauty of the kids and adults with a few photos of their smiles, but you’ll be missing the touch of their hand.

Back to the story. The day started with a quick trip to the market, where I had fun bargaining for an outfit for my grandson Malik, some lovely fabric and some large wooden spoons that you could play as well as use to dish out rice. It’s not everyone’s cup of tea, but I love bargaining, the play of it, the chance to engage with the seller, consumerism as relationship. 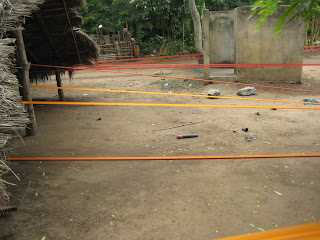 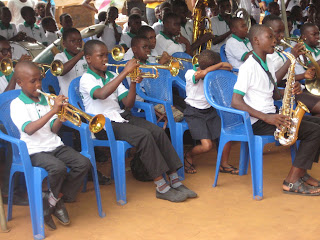 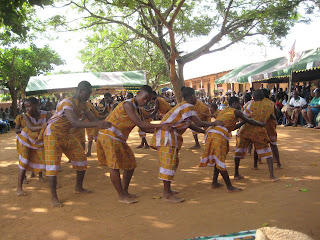 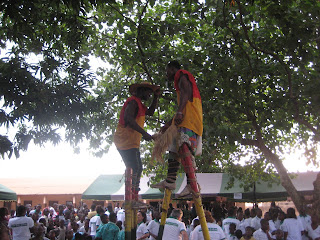 Quick lunch back at the hotel and then off to the Nunya Academy Festival. Have I mentioned that Nunya Academy is Dr. Kofi Gbolonyo’s dream, to create a school for children to not only carry on the traditional dances and drumming, but also learn Western band instruments? This and the last Orff-Afrique trip are a big part of that project, as we bring some feet to that dream not only through gifts and some contributions for instruments and resources, but through the many interactions our teachers on the trip have with the Nunya kids. (Nunya is the Ewe word for Wisdom).

Our presence helps give the project some presence and publicity in the local community as well and the other day, we all went to the land where a physical school is planned, saw the architect’s plans and watched the chief dig the first two strokes in the sod for the foundation. And I was given the honor to do two more on behalf of the San Francisco International Orff Course. A grand moment and one we hope to look back on in a year or so when the buildings become a reality. At the moment, all classes are held in ad hoc spaces. (If you’d like to contribute, there is a Website for Nunya!)


There were 24 items on the Festival Agenda, going back and forth between short speeches by various dignitaries (including James, Sofia and myself), the Nunya kids performing both traditional pieces and band music, other groups performing including some of us from the Orff-Afrique course sharing a stirring acapella gospel piece and some Venezuelan singing and drumming. An unexpected highlight was two men on tall stilts breaking into the center and doing some remarkable dances and tricks. Near the end, it was party time and at one point, there were two different drum ensembles with two different dance groups playing two different pieces some 20 feet away from each other, then 20 feet across the way, some of the Nunya kids playing their band piece, with the stilt walkers in the middle of it all. Then various kids following some of our Orff-Afrique teachers, one group clustered around James trying to figure outa cute little hand-trick, another around our SF School P.E. teacher Tina copying whatever motions she was making. In other words, complete and utter joyful chaos that would have intrigued Charles Ives musically and made a county fair seem like a tame polite gathering.

Back for dinner at the hotel and then a free night that included a long jam session with the electronic keyboard that had been brought in and funky drum set while others played cards, learned Ghanaian dance club moves from some of the hotel staff and just generally hung out enjoying each other’s company. We had had yet another rich, full day and now everyone was loving Saturday night.

“Everyone loves Saturday night” is also one of the first Ghanaian Highlife songs I learned a long time ago and carries a story beyond just the fun of partying at the end of a long week. The British rulers in the colonial period got nervous that people gathering would start talking and wondering why these invaders got to run their country, so at one point in the 1930’s, they imposed a curfew making it illegal for Ghanaians to be out after dark. After a while, they saw that the tension caused by forbidding such gatherings where people could dance and socialize was threatening to overflow and explode, so they relaxed the curfew for one night a week? Which one? Why Saturday, of course.

Needless to say, it’s such a pleasure to come as guests to this place, so happily learning some of the rich assortment of music and dance in Ghana and bringing and sharing some of our own. That’s the way it always should have been. What a beautiful history lesson that would be to teach the children! “From the time of the first Portuguese traders landing on the west coast of Africa, there was a delightful exchange of goods, ideas, culture, with mutual respect and admiration.” Well, it’s not too late. Let’s write that history for tomorrow’s generation.
Posted by Doug Goodkin at 8:43 AM