My first and foremost Orff teacher, Avon Gillespie, grew up as a middle class young man in L.A. He told me how one fateful day he stumbled into Bessie Jones and the Georgia Sea Island Singers playing music on a street corner to help keep the peace during the Watts riots. He stood stunned, every nerve and muscle in his body recognizing music he had never heard and calling him home to his identity as an African-American. It was a profound awakening and it led him to investigating the roots music of the glorious legacy of black music in America.

I remember feeling envious that I had no such awakening awaiting me in Belaruse where my Russian Jewish ancestors came from, couldn’t imagine being called to an ancestral identity that would bring me back from exile. So I set off to build my home at the crossroads of multiple cultures and identities, the place where West African drummers met with Buddhist meditators, where Basho, Rumi, Yeats and Gary Snyder sat down to discuss poetry, where Miles met Mozart and Appalachian mountain music. If I couldn’t identify wholly with one ethnic heritage, I would enjoy my spot at the crossroads, speaking comfortably with the rich diversity of folks passing through.

Today I felt that longing again to feel a deeper sense of belonging. And in a moment, you’ll see why. But I don’t want to be naïve about the price. Avon may have had his moment of epiphany, but he still had to live his life as a black man in the United States of America and be sent into exile time and time again. Though I spend a lot of time trying to imagine the full measure of that suffering, I will never know that pain anywhere close to the level that the people living it do.

But today I witnessed a moment of such power and beauty, one that took all 30 of us in the Orff-Afrique course by surprise and had everyone searching their bags for tissues.
Two years ago, we had a welcoming ceremony from the chief of a particular part of Dzodze, Ghana.  In that ceremony, our course leader Kofi and my colleague Sofia were named the King and Queen of Cultural Development in Dzodze because of their efforts to start a school (Nunya Academy) and bring people to this village to partake of the gifts of a remarkable musical culture. It was a serious, sometimes solemn and wholly sacred ceremony, a moment of grand import.

And here we were again, in front of the same chief with a new group of guests, re-committing ourselves to partake and give back. Now there was a more relaxed familiarity, but still the same sense of ceremonial importance. And then Kofi spoke of the Africans who had been taken and exiled for centuries and how he wished to welcome their descendants back to their land. The chief then called forth the four African-American students in our course to receive a bracelet and necklace. It was a stunning moment, not only for them, but for all of us witnessing. And when Kofi concluded with a simple and tearful, “This is your home. Welcome back,” the tears flowed like rain after a drought.

How to heal centuries of inflicted pain and sorrow has been on my mind, particularly in these last few months. Not only for the benefit of those who have been wronged, but for the benefit of those who thought they were right and need to come face-to-face with themselves. Apologies feel essential, the continual struggle for just laws and enforcement of the same a non-negotiable part of the deal, but also some sense of reparations. Simply giving money that might be spent at the mall seems a frivolous solution. But what of paying for trips to various African villages in collaboration with the folks there willing—as I believe they happily would be—to create such simple ceremonies of welcoming their long-lost brothers and sisters back. Not to live and work, but just to feel the blessing of being welcomed by the descendants of their ancestors, the ones who escaped exile (while suffering in a different way under colonialism). Might that help? 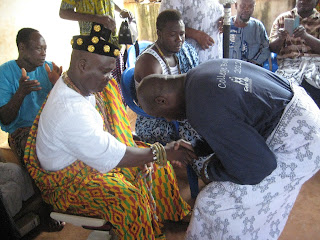