We could have spent the day at the beach, but instead signed up for tourist duty in Siracusa. Bad day, though, as much was closed on Monday. Nevertheless, off we went, braving the fierce midday Mediterranean sun, to the archeological park. We stood amongst the ruins of an ancient Roman Theater, an ancient Greek Theater, a temple to Zeus and more. But the highlight was a shaded grotto that led us to The Ear of Dionysus, a man-made cave with great acoustics and cool refreshing air.  We would have lingered there longer, but a woman started blowing a whistle. Turns out that the whole park closes by 2:00 on Mondays and we were lucky inasmuch we pretty much saw it all. 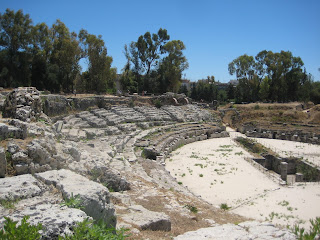 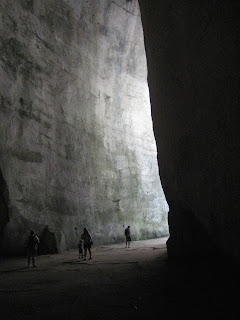 So out we went, found a bench in a shade and a truck selling gelatos and granites. Bought a lemon granite (pronounced gra-nee-tay, not like the rock) and made a half-century leap to my childhood when my friends and I rode our bikes to a place in nearby Roselle Park that sold Italian Ices. And that’s what granite is, sweet lemon (or orange or strawberry etc) juice poured over finely-crushed ice. Another trip into deep summer, a mid-day treat on a shady park bench and both the leisure and the body-tempo to just sit and savor it all. A family from the Netherlands stopped to ask us about the park and we collectively figured it out that because it was Monday, it was closed for the rest of the day. We sent them to Ortigia to soften their disappointment and fun to have that kind of traveler’s conversation. ”And what have you seen?”

Next stop was the Tear-drop Church. We were convinced the architect was the same as St. Mary’s in San Francisco, but never did find out a connection. Kind of ugly from the outside, but quite dramatic from the inside. This church is famous for the weeping Madonna, a statue who wept real tears in 1953 and healed the sick for a period of four days. It’s an official miracle in the Roman Catholic Church. Couldn’t help but think that Madonna statues all over the world today should be weeping and getting together to heal the sickness of hatred and violence. That’s a miracle I can get behind. 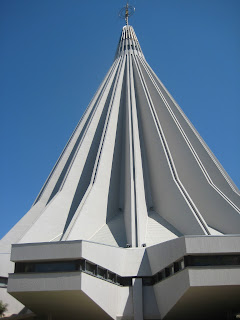 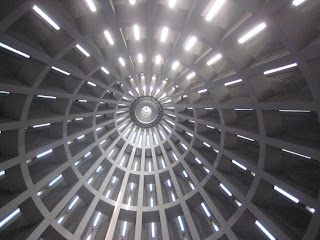 Felt our way through the maze of streets to our familiar neighborhood, picking our way through the shady side of the street. (Whoever wrote that song about The Sunnyside of the Street did not live in Siciliy in the summertime!) Made it back to our apartment and walked across the street to a little spit of water and jumped in to rejuvenate our sun-baked bodies. Apparently, there are real sandy beaches somewhere in Siracusa, but don’t think we’re going to be here long enough to find them. 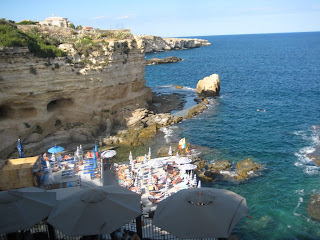 That’s the news, such as it is. Not terribly inspired, but hey, aren't you impressed I included photos?
Posted by Doug Goodkin at 10:14 AM