Encouragement from a Facebook friend and a certain truth to that. To go from 60 to 0 requires some attention when you exit the freeway ramp of work. But I did have at least 15 years practice as a kid and some 10 more as an emerging adult, so like riding a bicycle, the skills are there waiting to be remembered.

Starting the day yesterday by going out to the patio and winning my Triple-Crown Solitaire tournament. Not worth explaining, but only happens once or twice a year, so it’s a notable event in my personal mythology. I celebrated by hand-washing some laundry. Then fruit and yogurt breakfast and out in the car to do our job as tourists. 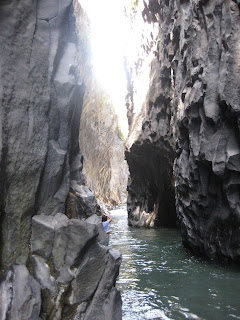 First went to a small canyon called Alcantara Gorge. Waded through refreshingly cold spring waters. The sun was already beating down mercilessly, so it was a relief to turn the corner in the canyon to the cool air of the place where the sun can’t reach.  Then back in the car to Giardini Naxos in search of the beach. Back in our old travel mode of finding our way by reading signs (no GPS) and it worked. Arrived in time for lunch at a restaurant overlooking the water and had ourselves a simple, but delicious Sicilian caprese pizza, great crust, mozzarella, fresh tomato (no tomato sauce) and well placed sprigs of basil and sprinklings of oregano.

In the background were some songs I hadn’t heard in a half a century or so and like the smells in Grandma’s kitchen, instantly transported me to a different time and reality — the New Jersey beaches of my childhood. Put Your Head on My Shoulder, Love Me With All Your Heart, Johnny Angel and more. Do today’s young teens have any songs like this to carry their first awakenings of “puppy love?” Real melodies that hold and affirm the tender buds of love’s first awakenings? I don’t think I’m being just a grouchy curmudgeon to suggest that rap songs or disco-beated pop fluff can do the job. But maybe there is a genre out there. What do I know?

Had the thought that “vacation” is related etymologically to “vacate” and it’s always interested to see what happens when class plans and schedules and such vacate from the mind and long-forgotten things crawl up from the basement. I started to make a list of other songs related to young love and summer romance— Puppy Love, Sealed with a Kiss, Summer Song, See You in September, Under the Boardwalk. In the midst of my despair about America’s wounds that won’t heal, with people like Trump pouring barrels of salt into them, these songs and jazz songs and old movies and old TV shows (as well as key books) awaken some deep core of my American identity that I can’t help but love. They were the soundtrack and backdrop to my growing up. They’re home. 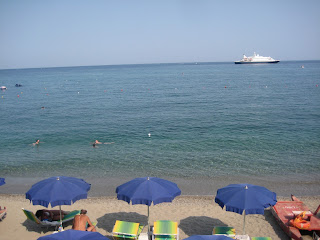 After lunch, down to the beach and two chairs under an umbrella, prepared to pay the 12 Euros, but no one ever came to collect. And finally my first swim of the summer, into the cool, but not too cold, waters of the Mediterranean singing all the words to Johnny Angel. (I used to have a terrible crush on Shelly Fabares, who played Mary in the Donna Reed Show). Always surprised by salt water, having done most of my summer swimming in Lake Michigan, but I got used to it. Post-beach, a mandatory summer gelato and back to our villa by late afternoon. Went to sit out on the veranda to read a bit, accompanied by the roar of the chainsaw. So much for the peace and tranquility of rural life. Whether it's Marin County or Sicily, the motors are roaring. (Yeats would have to revise his fantasy of living peacefully in the "bee-loud glade." Who can hear bees with the chainsaws roaring?!)

After dinner, our hosts invited us up to their house. A charming couple without a word of English between them, we’ve been communicating with Spanish and gestures. Tonight their son was there and he spoke enough English to translate. His mother is an artist of sorts and proudly showed us the hung paintings and he himself showed us some of his work, as he’s studying graphic arts at the University of Bologna (which incidentally, is the world’s oldest university). One room had a piano and I delighted them by playing The Maple Leaf Rag. Then outside for a little wine and lemonade and the father brought his computer and started writing messages to me using Google translator. I preferred the older methods of attempted communication and even with translator, always read the Italian first, most of which I could understand. But a cute new twist to intercultural communication. Whatever it takes.

And so passed my first full day of summer vacation. At night, started a new book with a perfect title—The Vacationers! On to Day Two!
Posted by Doug Goodkin at 10:41 PM