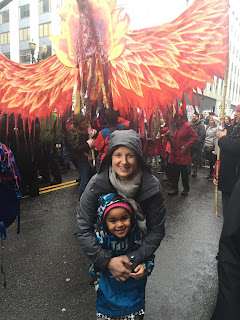 Don’t Mourn—Organize!
Before he was executed in 1915, social activist Joe Hill wrote a telegram to a friend saying “Don’t waste time mourning for me—organize!” This was shortened to the slogan above used by the IWW—International Workers of the World. Known as the Wobblies, this group of labor activists was formed in Chicago in 1905 to define the very real problem of labor/management relations and craft a vision of the future. The opening of their Constitution reads:
The working class and the employing class have nothing in common. There can be no peace so long as hunger and want are found among millions of the working people and the few, who make up the employing class, have all the good things of life.
Between these two classes a struggle must go on until the workers of the world organize as a class, take possession of the means of production, abolish the wage system, and live in harmony with the Earth…
These folks are part of our American ancestry of resistance, along with the Founding Fathers who rebelled against the British, the Underground Railroad helping escaped slaves and the Abolitionist Movement, the Woman’s Suffrage Movement, the Civil Rights Movement, the United Farmworkers Movement, The Black Panthers, the Vietnam War Protest, the Environmental Movement, the Women’s Movement, the Nuclear Freeze Movement, the Gay Pride Movement and beyond. Each took on a different slice of injustice, organized and swam upstream against the popular tide of business as usual. The common ground was refusal to be defined by others who didn’t understand them and only sought to control them, use them, manipulate them, suppress them, oppress them. At the bottom of each lay the call for human dignity, for equal rights and opportunity, the chance to be judged by the content of their character instead of gender, skin color, sexual preference or economic status.  As happens with us flawed mortal beings, folks in these movements could be inconsistent, focused only on their issue. Blacks could be homophobic, gays could be racists, labor organizers could be sexist, women could be CEO’s causing environmental damage or treating workers badly, etc.
But yesterday, out on the streets around the world, two remarkable things happened.
1)    Heeding the IWW’s slogan, we crawled out of our depression, aloneness, hopelessness watching the transfer of power and organized and took to the streets and wasn’t that extraordinary!!! Alone with our TV’s and computers, we felt like strangers in a strange land, but out on the street—Hey! Here we are! Thousands of us, millions of us who are not fueled by hate and false superiority, not brainwashed with the lies of the powers-that-be who are playing us for suckers, not desperate to have Daddy promise to fix the world for us when we know full well the guy can’t even fix the toilet. Out there marching, we didn’t all look alike, we didn’t all think alike, we didn’t buy our carbon-copy signs at Walmart with the same old mindless slogans, but made our own at home and crafted our words with our own creative zest— and with humor too! Suddenly we didn’t feel alone and in fact, felt the truth of the 3 million more popular votes and the tide of world opinion at our side. My wife and I marched in San Francisco, my daughter Talia in Washington DC, my daughter Kerala and our granddaughter Zadie (see photo above) in Portland. Marches happened in cities all across the country and in 50 other countries besides! Over 4 million people saying no to the guy who represents our worst selves and saying yes to our better selves. It was glorious.
Of course, it doesn’t erase the evils threatening to be signed into law, but it lets those folks know we’re not gonna take it lying down. And just a thought here—doctors, think about treating patients without charging them too much, teachers, close the doors to your rooms and treat kids kindly and tell them the stories of the Wobblies and such, policeman, refuse to arrest peaceful protesters, judges, stand up against the bad guys. And all of us watching each other’s backs.
2)    There’s nothing like a common enemy to bring people together and that’s the small light at the end of this dark tunnel—all these movements were finally together yesterday, each united against this man and his followers determined to set human evolution backwards, each looking beyond their immediate agenda to the unifying principle at the heart of them all— human kindness. And even beyond human kindness, because we have to speak on behalf of animals, trees, plants, watersheds, ozone layers. The Buddhists have a very broad view of what’s alive and worthy of love and protection, granting consciousness to a larger world than merely human. They call them “sentient beings” and the first Buddhist vow is:

“Though sentient beings are numberless, I vow to save them.”

And so I’d like to announce the movement that gathers all worthy movements together: The International Sentient Beings of the World. Not very sexy or swingin’, but you get my drift. It began yesterday with folks from just about every major city in the U.S. and dozens around the world taking to the street and speaking clearly: “Not in our name!”

One of my favorite signs from yesterday:

The slumbering bear of activism has awakened, determined to protect her cubs!!!! Arise!!!
Posted by Doug Goodkin at 9:06 AM