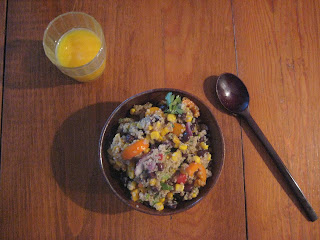 When is enough enough? How do we know when to leave things alone and spend more time savoring them as they are instead of trying to improve them? How can we learn to stop fixing things that ain’t broke?

These questions arose as I prepared my quinoa salad. Began with the base of quinoa, black beans, corn and Trader Joe’s corn relish. Truth be told, that’s enough. But we need vegetables, so I added peppers, tomatoes, red onion and avocado. Well, okay, but not clearly a big improvement. Then lime juice, then olive oil, then balsamic vinegar and each subsequent tasting, the suspicion that I had gone too far. Lost the original perfect combination of taste and texture. Added some cilantro to try to save it and it didn’t. Not that it was bad, but it clearly was not better for having added more.

And as an artist trying to live life as one makes art, I should have remembered the cardinal rule—more is not better. It can be, but not just by virtue of being more. If something is improved by the addition, it has more to do with the way it balances out the voices and gives the flavor just right for the occasion.

And so yesterday, having begun the day in tears feeling that the opening ceremony and staff intro. singing time was the real-life manifestation of every dream I ever held about life as it should be lived, my euphoria hit a wall when I went out to do carpool. This is the time when the cars line up to pick up kids and the adults help shepherd them into the right car.

I love carpool. There is something immensely satisfying about standing out on the sidewalk with my pencil and clipboard checking off the kids on the sheet. There’s the brain revival from trying to find their name in alphabetical order. There’s the guaranteed moment of contact with each kid as they tell me their name (even though I know them), make eye contact, say goodbye. Over the year, I develop little routines with the kids. The ones who tell me their name with an accent or say a particular combination of words or give me a fist bump goodbye. It’s a great way to end the school day.

So I went out to do my job with great happiness and found many staff and admin people huddled over an i-Pad. They had decided to do the new electronic check-out, some had to be there with their phones to create a hotspot, all the heads were down poking the screen and I was aghast. NOOOOOO!!!!! Though they had a flimsy reason about more efficient record-keeping, the truth is that nothing was broken. 10 years of paper-sign-out (and no paper before that) had just worked fine. We have never lost a kid at carpool and only rarely—and briefly—didn’t know where someone was. But now my routine of the eye contact, quick check with an object in my hand with no moving parts, was being threatened in the name of “progress.” In an already-over-the-top-heads-down-looking-at-screens world, the sacred space of carpool had been defiled. It was like adding 15 more ingredients to the quinoa salad that didn’t belong.

So there’s trouble in paradise. Until we sit down and admit once and for all that every technological change comes at a price to community and a certain kind of connection, a price that we need to consider before we mindlessly go with the electronic flow, we cannot claim to be wholly who we are—a community who thinks and acts from principle and vision first, not efficiency and convenience. (And ironically, the system is much less efficient—I challenged them to a John Henry duel to see who could check off kids faster and I was winning hands-down!)

Meanwhile, I’ll console myself with my 10-ingredient quinoa salad. In a bowl thrown by a friend who took up pottery again upon retirement and eaten with a wooden spoon gifted to me from a student in Korea. Not quite as good as the 4-ingredient one, but far better than the 25-ingredient one eaten while downloading the smell-a-quinoa-salad ap.