Facebook is a hall of mirrors, all mutual friends mostly reflecting back their agreed-upon values. But sometimes an outsider sneaks into the funhouse and then things get interesting. Disturbing, mostly, but important somehow. 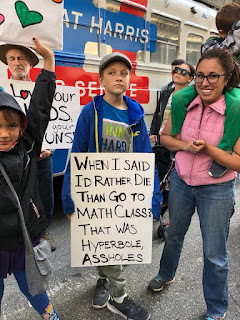 Hilarious. But sad that such a sign is needed. Love the imagination of the people who are actually thinking and feeling this unacceptable situation through instead of hiding behind the same old cliches of their "2nd Amendment rights." Carry on!

So you have a problem with people not wanting to lose freedom? What trash you are.

Well, wasn’t that a lovely response. I know it’s fruitless to engage, but I wrote anyway:

What I’ve loved about every march I’ve been on is the immense varieties of signs— clever, witty, poignant, personal, imaginative. People responding honestly from their personal experience to something going on around them. What drives me crazy about the right-wing response is the predictable clichés—“Guns don’t kill people. People kill people.” “Don’t take away my 2nd Amendment rights.” And so on.

So beneath the surface of any particular issue—gun control, black lives matter, me,too, immigration, etc.—lies people exercising their ”free speech” to parrot back the clichés fed to them from right-wing talk radio and Fox News. They’ve given up their capacity for independent thought and hidden behind some statement that excuses them from having to consider the matter or care about the people affected by the issue. Amidst many ways to read our current predicament, failure of imagination is not one that people are talking about very much. But consider:

In his book “The Educated Imagination” published in 1964, author Northrop Frye makes the following statements that leap over a half a century to us today:

• There’s the use of cliché, that is the use of ready-made, prefabricated formulas designed to give those who are too lazy to think the illusion of thinking.

• If our only aim is to say what gets by in society, our reactions will become almost completely mechanical. That’s the direction in which the use of clichés takes us. People who can do nothing but accept their social mythology can only try to huddle more closely together when they feel frightened or threatened and in that situation their clichés turn hysterical.

• The area of ordinary speech is a battleground between two forms of social speech, the speech of a mob and the speech of a free society. One stands for cliché, ready-made idea and automatic babble, and it leads us inevitably from illusion into hysteria. There can be no free speech in a mob. Nobody is capable of free speech unless he knows how to use language and such knowledge is not a gift, it had to be learned and worked at.

• There’s something in all of us that wants to drift toward a mob, where we can all say the same thing without having to think about it, because everybody is all alike, except people that we can hate or persecute. Every time we use words, we’re either fighting against this tendency or giving into it. When we fight against it, we’re taking the side of genuine and permanent human civilization.

• Consequently we have only the choice between a badly trained imagination and a well-trained one.

The imagination is not a flight of fancy that is dispensable to the human being. It is a faculty that shapes thought, that touches the heart, that allows for civil discourse. The ability to imagine the other and feel their sorrows and joys, the ability to imagine a solution beyond yesterday’s idea, the ability to imagine a world better than the one we inherited, are all skills that can be and should be consciously cultivated and crafted in the institution we call school. It is the only defense against brainwashing, against mindless compliance, against uncaring acceptance.

The uneducated imagination doesn’t mean that someone doesn’t know how to write a poem or improvise a jazz solo. It means they have left fallow their capacity to fully think and feel and if they have the power of a vote or own an assault rifle, it means they are a dangerous person, able and willing to harm others. As schools lean toward right answers correctable by computers, cut arts programs, ignore artful teaching in any subject, they rob children of their imaginative birthright and pose a danger to society.

And when an authentic idea meets a cliché, the cliché-user feels threatened and turns hysterical, foregoing conversation and going right to “you’re a piece of trash.” Kerry M. Collier, what happened to you? It’s not too late. Come to my Orff workshops and let’s see if we can awaken an imagination beyond the party line. Meanwhile, the rest of us would do well to remember John Lennon’s suggestion: