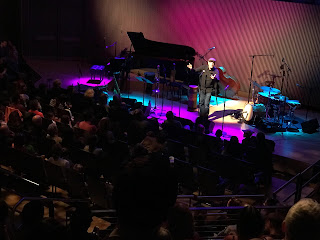 When asked which was his favorite composition, Duke Ellington replied, “The next one.”

I did it and it’s done. Dreamt of, lobbied for, organized, rehearsed, prepared a landmark occasion
In my musical life—performing at the prestigious SF Jazz Center with my first and only band, Doug Goodkin & the Pentatonics. That project included dreaming of, lobbying for, organizing, rehearsing for, preparing, producing another landmark—my first CD, which arrived exactly one day before the concert. The sold-out show was everything I hoped for— fun, musically satisfying, engaging for kids of all ages, educational, whimsical, groundbreaking, all with the added feature of three of my students from school (two 8th graders and one 4th grader) who brought down the house with their performance. The workshop we did afterwards with kids and parents playing, singing and dancing was likewise a rare chance for these kids of all ages to discover their musical selves and play something that actually sounded like jazz, whether they be 5 years old, 35 or 65. Yeah!

To add yet more to this delicious feast, got to lunch afterwards with my wife and daughter, sister and brother-in-law, son-in-law and two nephews. The only sadly missing piece was my other daughter and two grandchildren who just couldn’t swing coming down from Oregon for the occasion. To be perfectly honest, there was mild disappointment that there wasn’t more presence of folks I know from school, from local school alums with kids, from the Orff world, from friends and acquaintances and neighbors, from my men’s group. But hey, the show was sold out and it’s a good thing when the audience is not just people you know. Sold and signed about 40 CD’s after the show, had a beautiful conversation with a woman from West Africa who recognized some of the rhythms from our opening number and felt so proud of the way her culture had travelled the world with its musical inspiration and felt re-connected to her childhood listening to us play. After lunch, met one of the families who had gone to the concert who recognized the first song because they had lived in Nigeria. And walking in the park later that afternoon, a complete stranger looked at me and said, “Hey, great concert!!” All of this was glorious and just the right amount of fame. Not the “adoring fans” but the folks who sincerely felt and appreciated all the time, energy, intelligence, feeling , practice and dedication to children, jazz and education that went into those 50 minutes on stage. Yeah!

So that afternoon, thought I deserved to treat myself with a walk in the park, a soft ice cream dipped in dark chocolate and topped with sea salt and a movie at an old favorite theater. All of which was fine. But the best choice I made was to start working on a new project for my Level III Orff class this summer— making a summary of themes and melodies by Bach, Beethoven, Brahms, Chopin, Mozart, Schubert, Schumann and more based solely on the two chords I and V. Starting going through my Classical Music Fakebook with some one thousand melodies and marking the pieces that fit that criteria. (An impressive number, by the way. The imaginative potential of melodies with those two chords—including folk music of diverse cultures, rock, jazz and the like—is extraordinary. A real catalogue of such pieces would probably run in the tens of thousands.)

So the punch-line is that while it’s fine to rest on one’s well-deserved laurels for a moment, what real feels satisfying is to just start work on the next project. (I also have two Spring Concerts next week getting some 180 kids up on stage, so it’s hardly a laurel-resting time anyway.) Though there’s great satisfaction and a worthy response from World to be given laurels and part of the deal that opens the door to future opportunities, the laurels themselves are never the point of it all. It’s the worthy work that counts and the pleasure of the act of working and the sense that the work fits you and you have something valuable to bring to it that no one else can do in quite the same way, that’s were the real deal lies.

One can only be grateful. And I am. Onward!