Holidays often serve as markers of time. A reason to look back and remember where we’ve been, who we’ve been with, who we were in all those previous incarnations of ourselves. Thanksgiving is no exception and yesterday, I celebrated it with my wife Karen, my sister Ginny and my brother-in-law Jim. No kids or grandkids.

The last time this happened was in 1979. None of us had kids then and Karen and I been married for three weeks and the four of us decided to treat ourselves to a dinner out at a nearby restaurant. In the 43 years that followed, we mostly alternated houses and shared the festivities with the five kids that followed, occasionally our parents or a friend needing a place to go and later the grandkids. There were memorable stories— early ones with macrobiotic meals, one eating Greek salad in Athens, one with Ginny beginning labor on the couch as we sat down to turkey, the next when Karen’s water broke and we rushed back from Calistoga, one where daughter Kerala snuck back from Brown University and completely surprised us— and on and on. The kind of family lore that keeps getting passed down—with new stories coming up with the grandkids— with that warm feeling of “There we all were and here we all are and isn’t that something?”

Truth be told, the four of us yesterday had a marvelous time without an ounce of regret that there were no kids or grandkids. Of course, they would have been most welcome, but wasn’t it a pleasure to have some time together walking the new JFK, talking about Charles Mingus and Art Tatum and Beethoven’s Hammerklavier Sonata, bumping into students Karen and I had taught who are now 50 years old, re-visiting three houses in the Haight where we had lived when rent was in the low hundreds. We opted for a modest (but delicious) brined-prepared chicken over the larger turkey, sipped egg nog with brandy, played a game of 5 Crowns and in the 9 hours spent together, the conversation never flagged and the topics were either intellectually intriguing or sweetly nostalgic. We all easily walked the six plus miles, are in blessed good health and in my opinion, looked pretty darn good for folks in their 70’s. (You can judge for yourself in the photo!) And aren’t I grateful that none of us are on the opposite side of the political line and find each other both fun and interesting? Yes, I am.

It struck me that my sister and I have passed some 62 Thanksgivings together. Some gaps in college and occasionally other things coming up, but that felt like a remarkable run— and hopefully, many more to come! Witnessing all the various versions of ourselves, much of them intertwined in our shared lives. And of course, the same with Karen and Jim, give or take those first 20 years or so.

A lovely short breakfast together the next morning and off I go for a week of workshops in Toronto and Rochester. Past midnight in Toronto now and still some prep to do, but just wanted to note my gratitude for it all, the opportunity to spend 62 Thanksgivings with my wonderful sister. May it continue! 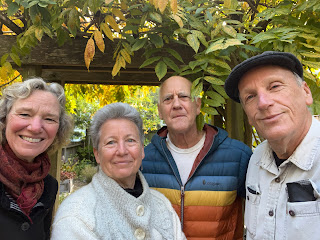