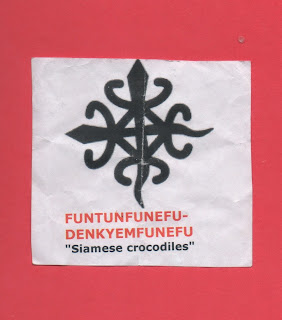 One of our Interns yesterday gave a wonderful presentation on Ghana to the 6th grade that included some images from adinkra cloth. She printed them up and passed them out as a springboard to discussion. I got one called “Siamese Crocodiles.”

I imagine there is no such creature in the natural world, but the idea is that these two crocodiles share one stomach. They fight with each other over food without realizing that it doesn’t matter which head captures the prey— it all goes into the same stomach. Thus Ghanaians are reminded that though they represent over 60 different ethnic groups, each with their own language, customs, identity, Ghana is their mutual stomach and unity is essential for survival.

Of course, this situation is not unique to Ghana. Indonesia’s motto is “Bhinneka Tunggal Ika— Unity Through Diversity” and the United States has “E Pluribus Unum— Out of Many, One.” But what about a planetary motto? The interdependence of our fragile planet is an ecological truth and the interconnectedness the open-hearted amongst us feel makes it clear that amidst millennia of fighting each other to survive, we not only have the possibility, but the necessity of recognizing that we all share one stomach. The old idea that one group can survive and thrive at the expense of the other is not only yesterday’s nightmare, but today’s lie and tomorrow’s disaster. Shall we borrow this icon and print it on every currency? Market it relentlessly so it is as common and recognizable as the Golden Arches and the Starbucks Maiden? Re-organize education and politics and family life around its non-negotiable truth?