Along with death and taxes, it is certain that we—all of us—will transgress against our neighbor/ spouse/ children/ co-workers/ ourselves. The question is when and whether we will apologize. The apologies I’ve given to others and those I’ve received from others have made a difference. And I’m still waiting for several that I imagine will never come and I imagine some are waiting for some from me (let me know if you’re one of them!). In this case, the healing must come from some larger place inside of me willing to forgive. Not to forget, but to re-tell the transgression in the context of a larger story and move on.

Perhaps an apology brings some satisfaction that we who thought we were right indeed (mostly) were and it certainly helps pave the road to forgiveness and reconciliation. But perhaps the most important feature is the acknowledgment from the person apologizing that what they said or did was indeed wrong. It is the first step taken to hope they won’t repeat it. Without an apology, one is left with the sense that it could, and probably will, happen again if there is no sense of remorse.

As on a personal level, so on a political level. Germany has created museums from its concentration camps, a public acknowledgment of the horrors of their past to teach the next generation what was so terribly wrong. And a bus stop in Australia, I read this impressive apology from the government to the Aboriginal peoples. 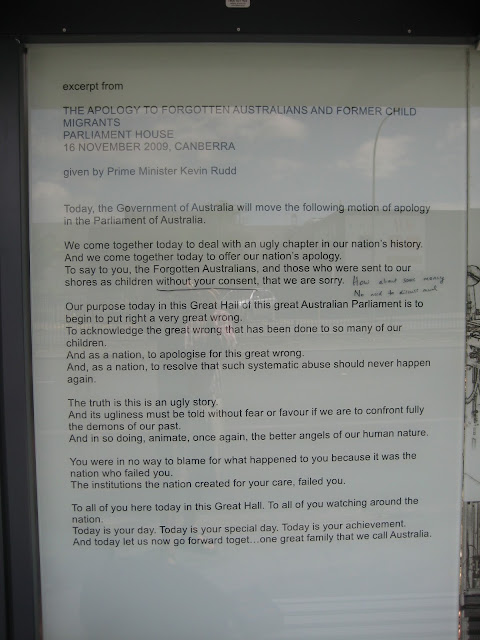 Where is the American equivalent? It took a racially-motivated terrorist attack in Charleston last year to finally get state governments in various Southern States to stop flying Confederate flags in honor of some glorious past that some still missed, a past dependent on inhuman and brutal slave labor. (The German equivalent would have been for state buildings to continue to display the swastika). Some years back, I visited a slave plantation and bought children’s books that said “Slavery was wrong” on one page and “here is the mistress in her beautiful bedroom making out the list of the day’s chores” on the next. Most of the tour was devoted to a ghost story to sideline the fact that the entire country is haunted by the ghosts of millions enslaved and murdered. And millions more Native Americans wiped out or shoved off to reservations.

Imagine living with centuries of abuse, hatred and intolerance without any formal, official or public apology. Imagine the courage to forgive without forgetting, the constant struggle to summon one’s resources of spirit so as not to be infected with hatred in return, the courage and stamina to turn the other cheek decade after decade, century after century, to summon some inner source of dignity denied from the outside, all the while speaking out against social injustice to a greater culture that has never publicly apologized nor seems to show any intention of ever doing so. The mind reels. Knowing what it cost me to try to forgive a single individual who wished me harm, I bow to those who shoulder this burden daily.

Perhaps Trump’s wall-building to keep out “lazy Mexican rapists,” “killing Muslims with bullets soaked in pig’s blood” and the like is fueled somewhat by our culture’s inability to publicly apologize. “Denial ain’t just a river in Egypt” and our long history of whitewashing our own atrocities, constantly pointing to the other as the “evil empires,” and fantasy of making “America great again” by reserving it for white folks only in the good ole boys club is healthy for exactly no one. A government document alone won’t stop police from killing innocent young black men or hold them accountable when they do, but it’s a necessary first step toward the healing we so desperately need. Imagine the power of telling Native Americans and African-Americans (for starters—the list continues) that it was wrong to build a nation on their land and labor and boast about how great we are. Imagine the courage to tell the world that public figures who have statues in public places, streets and airports named after them, did shameful things to their fellow human beings encouraged and protected by ideologies of privilege, prejudice and intolerance. It would be a difficult but impressive first step to show our commitment to increasing justice, inclusion, compassion.