Down By the Riverside 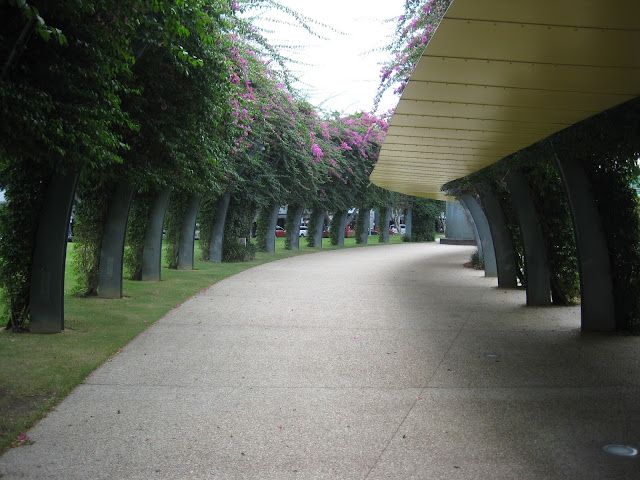 Occasionally I have the wisdom to follow my little collection of “notes to self.” One of which has been: “When crossing oceans to give workshops, give yourself a whole day to recover from jet lag before teaching.”

I arrived in Brisbane, Australia around 1 pm yesterday after some 18 hours of flying and decided to treat myself to a nap. A five-hour nap. Got up for dinner, went to bed at 10 pm, awoke at 2:30 am and I was ready for the day! So prepared my speech for the University, whittled my e-mails down to zero, played some disappointing Solitaire and disappeared for awhile in the novel I’m reading. Breakfast at 8:00 am and out the door with the day before me, no appointments to keep, no one to answer to but the whims of my traveling feet. I was relaxed about not sleeping through the night knowing the day to follow was wholly mine.

After breakfast, I set off to find the bus at the nearby shopping mall. I belief the designer of Australian roundabouts and malls must be named Daedalus and learned his craft from the ancient Greek who built the labyrinth. I twisted and turned through one windy path after another before finally landing in the brightly-lit mall of Everywhere, World, with mostly the same old stores selling the same old things hardly anyone needs. Note that the ancient Greek labyrinth was designed to house the monstrous Minotaur, a half-man, half-bull who was the offspring of a King Minos’s wife and a bull. Because of this unnatural mating of woman and beast, the Minotaur had no natural source of nourishment and so devoured humans for sustenance. There’s a moral in here somewhere for the insatiable consumption the Malls encourage, some unnatural creature who is slowly devouring us with its masked benevolent smile.

I did find the bus and had a pleasant 25-minute ride into downtown Brisbane and Queen St. Got off at another mall, escaped to the outdoor pedestrian mall, much more pleasant, and started my aimless wander in hot summer heat, but the blessing of some cloud cover. Stumbled into the Botanical Gardens, saw a few lizards and banyan trees and jacaranda mimosas and lots of long-beaked herons and egrets feeding the way birds seem to perpetually do. I sat and savored a garden quiet interrupted by the banging of nearby construction. Trees grow quietly, but high-rise building is a noisy affair. Still, I enjoyed just sitting and then reading my book until an exercise group surrounded me and started jumping rope and doing push-ups on my very bench! Time to move on.

The Gardens went right to the edge of the river and there was a lovely inviting path filled with joggers and bicyclists and a few leisurely strollers like myself. And so stroll I did for an hour or so back and forth, with a short break on a bench to do a Crostic puzzle. I lunched on a mushroom burger with sweet potato fries at a Garden Café and then crossed the footbridge to the other side and South Bank. And here things began to look familiar from my two previous trips to Brisbane in 1996 and 2002. The beach right in the city, the art museum, the rainforest path and more. I thought about other riverside walks I’ve done in other cities—Salzburg, Prague, Budapest, Paris, London. San Antonio, Portland, Memphis, Tampa. Bangkok, Istanbul, Suzhou. The people flowing down the path, the water flowing down the river, it’s a happy combination. 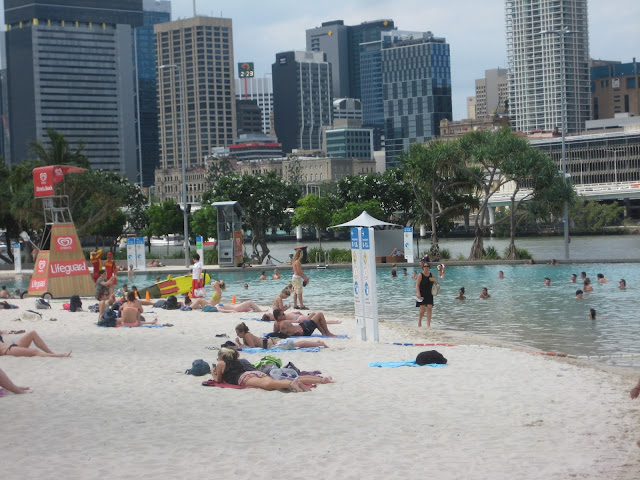 And so I passed a delightful day down by the riverside doing nothing in particular and loving it all. Another half-an-hour after the return bus lost in the maze of my own confusion before finally finding the hotel and just in time, as the late afternoon rains began pouring down. Now in my spacious studio apartment ready to plan tomorrow’s University classes and keep myself up until 10, happy to have laid down my sword and shield down by the riverside and passed a peaceful day in blissful jet-lagged solitude.
Posted by Doug Goodkin at 12:52 AM