And so concludes my 43rd year at The San Francisco School, over half of that long tenure with this dream team! It's always quite a festive conclusion. Camping. Samba Contest. 8th-Staff basketball game. 8th grade final sharing. Mud pies dessert ritual. Closing ceremony with gongs, songs and more. Final hug-line. Then another whole 8th graduation ceremony tomorrow. Friends and colleagues retiring all around me left and right, but I can't just see any reason to stop. On to year 44!

I believe many people would have responded as they did, but I cheated a little by including this photo of myself with my colleagues. 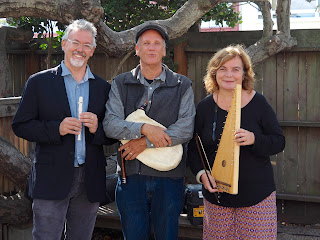 That always beefs up the likes! And of course, I was sincere, since this hasn’t been my work these past 22 plus years, but our work. And because we do so much teacher training as a team and also independently around the world, people know us as three facets of the same vision and appreciate both the similarities and the differences and are inspired by that rare gift of meeting the people just right and sticking it out for the long haul. Someday the memoirs will reveal the thornier sides of three strong-willed independent artist teachers sharing the same space and negotiating their way through deeply intertwined relationship— the work at school, co-directing the Orff summer course, the Ghana course, the Salzburg Forum and Orff Institute Special Course connection, the books published by Pentatonic Press, the special kid performing groups, the 26 school CD recordings, the articles for music journals and so on and so on. But just a sneak preview of said memoir. Though like any human beings, we do get tangled up and frustrated and once-in-a-blue-moon fed up with each other, there are no Lennon-McCartney hatreds to be revealed. We mostly deeply respect each other, challenge each other in healthy ways, affirm each other, like each other, love each other and feel astounded and grateful that we got brought together to do this worthy work.

But now the blog’s theme. With 485 Facebook likes and 69 comments, the last five said something to the effect of “You guys are amazing!” So it got me thinking about that word. And my etymology sources link it to “confusion, perplexity, surprise,” the kind of feelings someone in a maze has trying to find his or her way in or out.

And that’s a pretty good image. Because the path to inspired music education is anything but straight and narrow. There are constant dead ends and high hedges that don’t allow you to see what’s around the corner. And it is by bumping into those hedged walls and turning down those dead ends and then resuming the search that the real work happens. And the surprises can be both “a-ha!” moments—“I chose the right one this time!” or “Oops! Well, that didn’t work like I thought it would.”

What the three of us hold in common is our lifelong dedication and determination to keep walking. We reach the center every time a kid says, “That was fun! Can we do it again?” or the bell rings and the class says, “Aw! Do we have to go to recess?” So it’s not so much that the three of us are amazing, but that the work itself is “a-mazing” and we have not wavered in our dedication to walk its full length. And then serve as tour guides for others taking the journey. And the fact that I’ve done if for over four decades and we’ve kept at it together for over two decades. Well, that’s amazing! On to year 44!
Posted by Doug Goodkin at 8:46 AM