Get Out of the Way 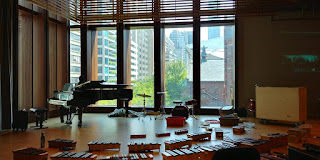 Happy to report I made friends with two beautiful pianos here at The Royal Conservatory of Music. One is a Steinway, the other a Yamaha and after feeling pressured to sound great because the pianos do, I remembered to just play a chord and let it ring, to step to the side and get out of the way and let the music sound. To stop muscularly imposing myself on the keys and just let my fingers release the beauty inside of them. And now the music is singing.

I teach some 22 willing souls some jazz and Orff and humanitarian reminders from 9 to 4 each day and then stay after for another hour by myself, no written music in sight, just a stored repertoire of hundreds of pieces. A moment of silence to see which song suggests itself and then off we go together, skipping down the path and never a path that I’ve already walked in the same way. Last night, went to my ritual barbecue at a friend’s house and then played the mandatory Besame Mucho on her piano and ended with a montuno-like Latin killer groove that is somewhat new for me (thanks, Miguelito!) and it inspired her to play her favorite Latin pieces (she’s a ballroom dancer with quite a repertoire of favorite songs for her mambo/ rhumba/ salsa moves). Well, wasn’t that fun! Turns out I have an ear for the way the chords fall and just started playing along to some 15 songs from different artists and if I do say so myself, I sounded good! On her less-than-Conservatory-quality spinet piano. Sometimes the Muse just descends and we dance together and isn’t that fine!

Yesterday had an hour class with some thirty 6 and 7 year-olds I had never met and that was a class to wrap up in a ribbon and put under the Christmas tree of memorable experiences. From the first moment, we were in a heaven that flowed effortlessly from one activity to another and bubbled along with great humor (they liked my jokes!), the genius of child expression, the challenge of boys messin’ around gently but clearly re-directed, the absolute ease I felt with the children and their happiness and comfort with me. When I asked them 45 minutes later if they wanted to know my name and if they could guess it, the first one said “Mr. Potato-Head?” ( a brilliant guess since we had just done my version of the game One Potato) and we all laughed. With some hints, another guessed my actually name and started chanting “I got it! I got his name!” and that was his great moment in the class, since before that he was the President of the Messin’ Around Boys. And I acknowledged it. “Let’s all clap for the genius of name-guessing, Mr. Alistair! Way to go!!”

Today is the last of the five days and the last course of some seven courses this summer and in my teaching, I also have learned to get out of the way, just be a conduit for some great music, some great pedagogical processes that release music and some talk that reminds people of their better selves and illuminates all the obstacles society throws in our way to make us accept lesser versions of ourselves. Yesterday I began class with the Conservatory motto of “Cleave to the Masters” and ended up spontaneously improvising a lecture that included Bach walking 200 miles to see Buxtehude, Duke Ellington learning harmony in the back of a taxicab, a German fake scientist concocting the theory of racial superiority, statues being taken down in the South and some 10 other themes that somehow made sense. 30 minutes later, we played Little Sally Walker to clear the air and the day began from their with a vibrant Ghana xylophone piece.

My first public affirmation of my greatest hope beyond writing some five books this Fall—beginning my own Podcast series, more focused than this blog with live musical examples played by myself and friends. It will be the right medium for so many of these thoughts I’ve spent a lifetime cultivating. And whether playing piano, teaching or writing, the hope is the same—play the chord and let the sounds/ activities/ ideas fully resonate before they lead me to the next needed sound/ activity/ idea, get out of the way and let them speak. Hope you’ll be listening!
Posted by Doug Goodkin at 1:00 AM