Truth be told, my first childhood was quite happy. It wasn’t all roses and rainbows—I didn’t love school , I didn’t have Orff music classes, I ate too much candy and Swanson’s frozen TV dinners and the only foreign place I visited was Toronto, Canada. But I grew up in a time when parenting was not yet a verb and my friends and I had free reign of the 200-acre park a block from my house. We chose our own teams for neighborhood baseball or football, played tag and hide-and-seek, skipped stones, caught falling leaves, trapped fireflies in jars, sledded down wintry hills. My mother left peanut butter sandwiches for me in the milk box (yes, that outdoor box where milk in glass bottles was delivered) and fed me three meals daily, my father had Beethoven records I loved to listen to and an organ where I learned to play Bach. On rainy days, we had board games and card games and of course, television where I learned about people like Eddie Haskell and Dobie Gillis and had a wicked crush on Shelly Fabares and Annette Funicello. I got into just the right kind of mischief that kids are supposed to get into without anyone getting hurt—well, not too much.

Fathering my two daughters was indeed a second childhood, getting to play all those kid games and watch all those kid movies (The Parent Trap! Lady and the Tramp!) and read all those kid books (Charlotte’s Web! The Wind in the Willows!) and play Go-Fish and War and later Boggle and basketball and summers swimming in Lake Michigan and foreign trips far beyond Toronto, Canada. And lo and behold, my second childhood was as happy as the first , minus the carefree innocence.

And now here I am in my third childhood, right now, back on Lake Michigan doing the same things with my grandchildren I did with my own children. With Zadie, 6 ½ years old, a small sampling of our activities:

• Long hours at the beach.
• Swimming in the lake and witnessing her first successful 20-foot-without-a-lifejacket doggie paddle.
• Canoeing on the lake.
• Climbing up the Sugarbowl Dune and running down.
• War card game and teaching her Solitaire.
• Reading Nancy Drew to her.
• Her reading my colleague Pamela’s Elf books to me.
• Our first piano duet (that black key piece that begins with your fist.)
• Clapping plays like Miss Mary Mack.
• Songs, songs, songs.
• Paddleball (10 our record).
• Going to the Drive-in Movie Theater.
• Building with legos.
• Applauding the drawing and sewing she’s doing with her grandmother.
• And more…

With Malik (3-years old), some of the above, splashing around in the lake with him, throwing a football (10 throws and catches our record!) and marveling at the things he ends up saying. One dinner when one of (unnamed for the moment) was grouchy, he said, “Why are you so sad when everyone else is happy?” And tonight when I came back to our cottage to prepare dinner and told him he could stay at the neighbor's where everyone was, he said, “But you’ll be lonely!”

And so my third childhood is turning out to be as happy as the other two. And isn’t that a blessing? 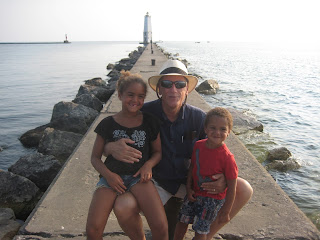