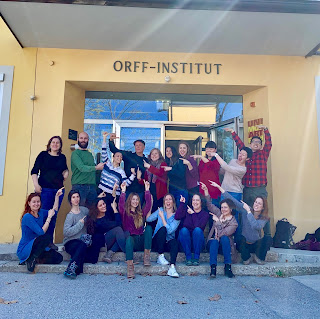 Yesterday, I showed my growing collection of videos to the Special Course folks (pictured above). It starts with my granddaughter Zadie when she was 2 scat-singing while she paints and ends with me and my Jazz course playing and singing I Got Rhythm with my 92-year old Mom at my side at the Jewish Home for the Aged. In-between are snippets of classes from my 5-year olds and 4thgraders and 8thgraders at the SF School, performances by various student group and the two performing groups I’ve been in, Xephyr and Doug Goodkin and the Pentatonics. It included footage of me and others in various venues at previous Orff Symposiums in Salzburg—1995, 2006, 2011.

Throughout them all is the common thread of natural, relaxed, festive and joyful music-making, no matter who, where or what age. A playful, childlike spirit runs through all the music and dance and the general tone is sheer joy, bringing happiness to anyone in the room at the time, performer and audience alike. People switch effortlessly between instruments, move freely between playing, singing and dancing, improvise like the wind, listen and connect with each other and demonstrate enough virtuosity to make the music really swing and sing. With all due modesty, it stands as a testament to how the Orff approach can awaken, release, cultivate and share the music that is our birthright, a tangible model of what the result is when an Orff program is really working.

At the end, I spontaneously said, “None of this would have been possible without the things that have happened right here in this room. None of it. ” It was a dramatic moment! It was true! The lineage of Orff teachers that reached me and then was passed down through me to my students mostly all trained, developed, worked right here in the Orff Institut, in the very room (and others) where I was sharing the fruits of all those labors. I continued:

“And each of you here is part of this live, ongoing legacy and what we are doing during these two weeks and during your 9 months in this room will reach some children who we will never meet, but will impact them nonetheless. Some teachers who may one day trace their life back to you and to me and to my teachers may someday pause in wonder that all of this made their life so happy and satisfying. And who knows? That moment of gratitude might take place right in this room!”

At least I hope it does. The fact of the matter is that more or less since I began coming here in 1990, the Institut has been pulled in many directions, and sometimes opposite ones, as it tries to negotiate its status as a satellite to the Mozarteum Conservatory, which in turn has to attend to the policy-du-jour of the Austrian Government. The autonomy that makes for a healthy institution is being chipped away and though it would sadden me deeply, it wouldn’t shock me if finally the Institut lost the thread with Orff’s far-reaching vision, victim of the very “drawing-board mentalities” Orff warned against it.

No one can predict. But one can be supremely grateful for what has been and for the chance to work in the very building where you can hear the echoes of departed footsteps—those of Orff himself, Gunild Keetman, Wilhelm Keller, Margaret Murray, Minne Ronnefeld, Doreen Hall, Hermann Regner, my teacher Avon Gillespie (for one year), Richard Gill and many more who helped shape and craft this beautiful practice. And thanks to all who continue to hold the line and keep the thread unbroken. It means the world to children and teachers worldwide.

This my thanks to the Orff Institut. May it continue!!!