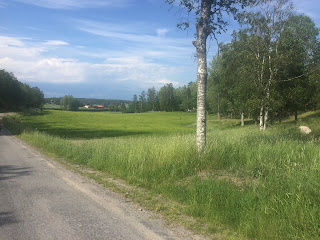 The earth expanding right hand and left hand,
The picture alive, every part in its best light,
The music falling in where it is wanted, and stopping where it is not wanted,
The cheerful voice of the public road, the gay fresh sentiment of the road. –Whitman

I was 16 years old when I first read Walt Whitman and re-reading his Song of the Open Road, I’m drawn back to that sense of adventure, of excitement, my whole life a beckoning road before me, enticing, inviting, the delightful sense of the possibility of the unknown given language by this poet. It will be the poem to frame this bike trip and though so much of the road is behind me, still I have not reached its end and each new horizon keeps my feet pedaling with excitement and enthusiasm.

And so Day 2 of the 8 day biking adventure began with a blue sky and slight breeze as we began one of the longer rides, some 45 miles from Trossa to Nykoping in the land south of Stockholm. On the first day, we stopped at a palace and decided to swim in the lake surrounding it. Well, more jump in and jump out, as the water was colder than this old body is comfortable with. On this day, we arrived at a small sandy beach on the Baltic Sea, but with a slight morning chill in the air and a memory of yesterday’s freezing water, no one was enticed to jump in. So after a short snack of carrot, apple and chocolate, off we went into the woods and out through the fields until arriving at a small town and a large fancy Manor that would serve us a needed and delicious lunch. Except for the fact that the restaurant wasn’t open until June 23rd. 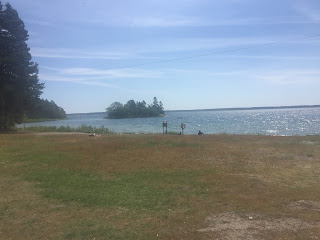 We learned the hard way that the Swedish countryside is different from any countryside we have encountered in that there are hardly any small towns, more like various clusters of six houses. Hence, no little cafes or restaurants or convenience stores or Farmer’s Market stands for miles and miles and miles. (Technically, kilometers and kilometers and kilometers). And even with long stretches on a major road, never once passed a gas station, which theoretically might have some chips or some snack food. With some 20 plus miles ahead of us and no food prospects, we were a bit concerned. Whipped out our phones and tried to find if the nature reserve on the way might have something and there seemed to be a chance that one place did.

So off we went to find out and saw a sign on the highway with a fork on it that seemed promising and headed off in that direction. There we stumbled on an industrial park of sorts that was a Tech Place with lots of cars in the parking lots. Cars, people? Must be food! So we wound around and found a cafeteria of sorts that was…closed. But a worker was there and she sold us some fruit from the basket, invited us to grab some of the Rye Krisp crackers they had and let us buy an ice cream or two. We sat on the grass with all of this for lunch and my wife Karen yelped with disgust when she discovered that her ice cream bar was not chocolate on the outside, but licorice which she hates. Well, that was a memorable meal.

The place itself was a bit odd, hidden away in the countryside with parts of it behind locked gates with “No photography” signs. It was called a “Vital Installation” and we conjectured about creepy experiments going on there. Later, when a lovely woman helped us with directions to get to our hotel, we asked her about the place and detected a guarded, “I don’t know what goes on there” response. Well, maybe we imagined it.

Earlier, we passed a field with a horse standing over another horse who was lying down and not moving. We conjectured that it had died and its friend/ mate was mourning. But then the horse lying down sat up. So best not to jump to conclusions too early! 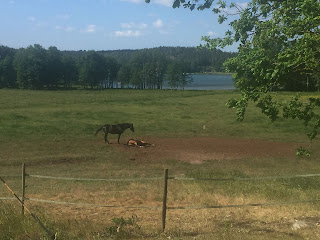 A lovely dinner at a lovely hotel overlooking a river and a welcome sleep with muscles toned and body well-exercised. Had a dream that Trump was deposed and Nancy Pelosi given the Presidency and in the dream, woke up and wondered if it was real and had it confirmed that it was and I was so happy. Several more times in the dream, I “woke up” and asked the same and each time was affirmed. Imagine how disappointed I was when I really woke up. Though maybe I should check today’s news!

Day 3—today—is a “day off” and well-timed as it is raining a bit and it feels good to catch up on the storyline, such as it is. More to come!
Posted by Doug Goodkin at 1:30 AM