We Are Who We Honor 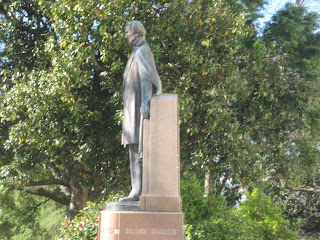 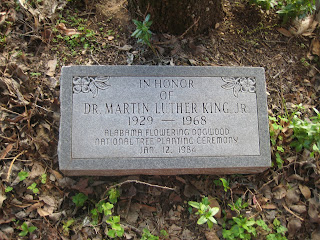 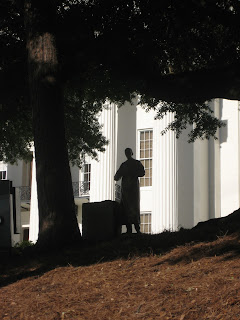 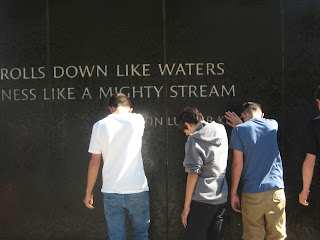 Yesterday we ended our trip and flew out from Birmingham’s Shuttlesworth Airport, named for that extraordinary preacher, Fred Shuttlesworth, who did so much to organize and sustain the Civil Rights movement in Birmingham. The night before, we went to the King Memorial in Montgomery, a beautiful and artistically rendered tribute to 40 people killed between 1954 and 1968 while working for justice, mostly by the Klan and police, who sometimes were one and the same. Murderers, by the way, who mostly never got convicted for their crimes or served ridiculously light sentences for purposefully taking away human lives. Across the street from the Memorial is the Southern Poverty Law Center, an organization dedicated to suing hate groups in a building recently built to repel terrorists (the Christian Klan, not the Islam ISIS) with an armed guard standing watch 24/7.
Down the road is the State Capitol, where the Selma marchers ended the march on the steps where Governor George Wallace had stood and chanted, “Segregation now! Segregation forever!” Along the road were some plaques honoring the marchers.
But in front of the building is a statue and guess who it is? Jefferson Davis, President of the Confederacy (above left). And nearby is a statue of a physician named J. Marion Sims (above right). He was a renowned gynecologist who did experimental work on enslaved women without their consent and without anesthesia. And there is the statue to honor him, next to the same steps where Dr. King addressed the tired but jubilant marchers.
Old heroes die hard. (I’m still unhappy with the Columbus statue in front of San Francisco’s Coit Tower. Or if it has to be there, the plaque should read something about him initiating the Reign of Terror for the native inhabitants of North America.) We are who we honor, we become the stories we tell and a symbolic step in our evolution is to consciously choose the statues we put up, the faces we put on stamps or money, the people we name schools or airports after. (Alongside, Reagan Airport in Washington, Bush Airport in Houston, John Wayne Airport in Orange County are Shuttlesworth Airport in Birmingham, Medgar Evans Airport in Jackson, Mississippi and Kennedy Airport in New York.)
On one hand, you can casually say, “Different heroes for different folks. There’s room for all.” But when the heroes have clearly violated basic human rights and lived far below the standard of human decency, oppressing one group to protect the unearned privilege of another, continuing to honor them is affirming that it was okay and the others can aspire to be like them. The moral compass has a true north and we can’t navigate through the country of human health, happiness and freedom without a standard upheld in the way we publicly name Americans we consider worthy of honor. I suggest a doctor experimenting on enslaved women like they were laboratory animals not only violates the Hippocratic Oath, but disqualifies him from a statue in a public place. Don’t you think?
This is true in all corners of our country, but is particularly poignant in the American South. The cognitive dissonance of Jefferson Davis and J. Marion Sims next to the Civil Rights Memorial and the Southern Poverty Law Center evokes Matthew Arnold’s lines:
"…we are wandering between two worlds, one dead, the other powerless to be born.”
As this trip made clear in each story it told, it is time for the old stories of white supremacy, subjugation of fellow humans, terrorism, injustice, institutionalized fear and abuse, to die. And part of that story is dead. To sit on the couch as a white man watching integrated basketball with Simeon Wright (see last blog) is, as he noted, an extraordinary leap in culture that he never could have dreamed of as a kid.

That world is dead. Or so we thought. Can you feel its heart still beating in the Trump and Cruz rallies? And the world of justice and compassion is far from wholly powerless to be born, is birthed in each story truly told from all sides and taken into the heart by hopeful children ready to take up where Dr. King and his successors left off. But as long as Davis and Sims stand in front of the Alabama State Capitol building, Columbus in front of Coit Tower, it can’t be wholly born either.


Take some time to notice these things around us. We are who we honor. Whether you start a campaign to create the Art Tatum library in Toledo, Ohio or the Dolores Huerta High School in Pueblo, Colorado, it can make a difference. Let’s get to work.

PS: I didn't expect such a quick response, but just read today that Harriet Tubman, that valiant woman helping enslaved people escape on the Underground Railroad, will replace Andrew Jackson, a slaveowner and oppressor of Native Americans, on the $20 bill. That's what I'm talking' about!!!
Posted by Doug Goodkin at 9:18 AM