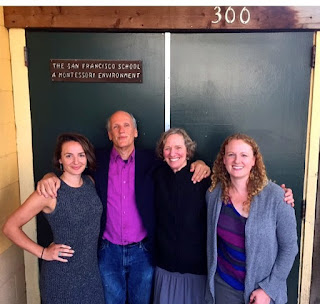 In today’s episode, you will meet the following characters:
KAREN: An art teacher at The San Francisco School about to retire after 42 years.
DOUG: Her husband, music teacher of 41 years at the same school.
KERALA: Their first daughter, currently living in Portland, Oregon.
TALIA: Their second daughter, 5th grade teacher at the same school.
ZADIE: Kerala’s 4 ½ yr. old daughter. (D & K’s granddaughter).
MALIK: Kerala’s 10-month old son. (D & K’s grandson).
BARCLAY: Karen’s brother.
LORI: Barclay’s wife.
EREN: Barclay and Lori’s 25-year old son.
GINNY: Doug’s sister.
MARLENE: Karen’s friend for over 40 years.
Here’s their story.
On Friday, April 29th, Kerala, Zadie and Malik, visiting for the week, woke up at Ginny’s house in Sebastopol, CA, an hour and a half north of San Francisco. That morning, Doug went to school to teach, Karen stayed at home.
Around noon, Marlene arrived at Karen’s house in San Francisco from Davis. Barclay and Lori, coming from Wisconsin to surprise Karen at her retirement party/art show,  arrived at the SF Airport around noon. An hour later, their son Eren flew in from North Carolina. Two took a cab and one took Uber to arrive at their hotel near Karen’s house. Ginny drove Kerala, Zadie and Malik down from Sebastopol, arriving in time for Malik’s nap around 2 pm.
At 2:30, Marlene drove Karen to The San Francisco School. Barclay, Lori and Eren walked to Karen’s house and met up with Ginny et al. At 4:00, the gathering began in the library of the SF School. Some alums and alum parents and neighbors and friends came to see Karen’s work and congratulate her. Barclay, Lori, Eren, Ginny, Kerala, Zadie and Malik arrived around 4:30. Doug distracted Karen, getting her to talk about a painting on the wall while Barclay snuck up behind her. He tapped her on her shoulder, turned around and SURPRISE!!! It worked! She was thrilled!
Soon after, people gathered to hear people speak about Karen’s teaching and her art and it was lovely—short, poignant stories from people from all parts of her life. More snacks and browsing and visiting and soon after 6, Doug had the family gather in front of the school door to take a historic photo—the last time the whole family would be standing at that door with Karen as an active teacher. (see above).
We now had three cars—Doug’s, Marlene’s and Talia’s— to take 10 people back to Karen and Doug’s house. Ginny went to a dance concert. All arrived, Doug and Eren picked up Thai take-out and we spent a lovely evening together visiting.
The next morning was the school’s long-awaited 50th party! Doug and Karen drove in around 11:00, Talia took Kerala, Zadie and Malik a little later and Barclay, Lori and Eren took a cab. At 1:00, Kerala, Zadie, Malik and Talia came to Doug's (and James and Sofia’s) Alum Singing Time. At 2:00, the main ceremony was scheduled to start. Now things began to get even more interesting.
Kerala had to be in Guerneville some two hours away for a wedding that began at 5:00. So she snuck away taking Doug and Karen’s car and leaving her kids with mostly Talia and Ginny in charge. Doug was the MC of the ceremony, Karen was scheduled to speak at the end, followed by Doug. Zadie spent some time with Karen awaiting her turn and Malik fell asleep in Talia’s arms. Then Zadie went outside to play with Eren watching while Karen and Doug spoke.
Now it was 4:30 and Talia had to begin a long drive (some four hours) in her car to Humboldt County to run a half-marathon the next morning. She had transferred the kids’ car seats to Ginny’s car and Doug, Karen, Zadie and Malik were driven home. Barclay, Lori and Eren took the 44 Muni bus. Eren went to eat sushi, Lori climbed a hill to see a sunset and Barclay went to a local taco place to bring back burritos. Are you following all this?
Now came the moment of truth. With both Talia and Kerala (and Marlene and Ginny) gone, Doug and Karen were carless and left alone for the night with the grandchildren. Malik habitually woke up 3 or 4 times a night and now he would not have his Mama there to comfort him. After the intensity of the art show and party, Doug and Karen were kind of ready to relax and let down. But now their grandparenthood was about to be put to the test.
At 7:30 Malik went down to sleep. At 10:30, he woke up. Doug fed him a bottle, walked him around, sang to him and put him down again, this time joining him in the bed. Karen slept in the bed in the other room next to Zadie. At 3:30, Malik woke up and woke Doug up by grabbing his face. Doug gave him another bottle, sang to him, lay down for more face-grabbing and both went to sleep until 7:00 in the morning! They survived!
The next morning, Doug offered to drive Barclay and Lori to the airport and then realized he didn’t have a car! They got there on their own, the grandparents and grandkids walked to the Farmer’s Market and back through the Park. Kerala came home at noon with the car, a bit peeved that Malik was so good for his grandparents! But also happy for us. Eren came over to stay at our house, as he’ll be visiting for a week. We all went to the beach on a warm San Francisco Day, back to bathe the kids, a farewell dinner and Doug drove Kerala, Zadie and Malik to the airport.
Well, dear diary, as you can see, it has been quite an interesting few days, a giant chess game figuring out how to move all the pieces. It was complicated! But also fun and beautiful and everyone won. We’re hoping for a slightly quieter week in Lake Wobegon coming up.
Posted by Doug Goodkin at 8:15 PM