The Bridge of Dignity

Dignity: The state or quality of being worthy of honor or respect.

“I know a great many white people and black people, men and women, straight and gay, whatever, who are unlike the majority of their countrymen. On what basis we could form a coalition is an open question. It seems to me that it has to based on the grounds of human dignity.”   — James Baldwin; The Last Interview and Other Conversations

Now that I’ve erected the Wall of Shame, it’s time to build the Bridge of Dignity. It’s the assault on dignity that connects marginalized people of all backgrounds. It’s the plea to be accorded dignity that makes a coalition of all those rendered powerless and voiceless. Now’s the time to recognize that all the “isms” are connected by the assaults and all the “anti-“ movements need to stop working in isolation and build a coalition of their common need.

The strange thing is that the folks who do violence to the dignity of groups different from themselves are most affronted by the inner dignity that people can carry when they refuse to be defined by other’s narrow prejudices. Look at this photo of Elizabeth Eckford, one of the 9 students who integrated Little Rock High School in 1957. See how she carries herself with such unassailable dignity. Who are the undignified people in this photo?

The bullies of privilege try to make people with dark skin or different sexual preferences or different religious beliefs or a different gender ashamed of who they are and there’s no question that the collective weight of an all-out cultural assault does seep below the skin and erode the soul’s magnificence. But who is truly the shameful person here? The target or the arrow?

Dignity is our birthright and not to be granted or denied on the basis of either innate biological groupings of race and gender nor personal human choices like religion and sexuality. We are all initially worthy of honor and respect. We should be given dignity for free, but ironically, also have to earn it by our behavior and treatment of others. Likewise, no one should be shamed or made to feel shame for the above, but our behavior and treatment of others can certainly deserve the label of shame. (See my Wall of Shame). In short, dignity is a noun equally applicable to all, shame is a noun equally unacceptable to heap thoughtlessly on another. But both are also verbs and flower or wilt according to how we live our lives.

In looking for the photo of Elizabeth Eckford, I found an extraordinary story about Hazel Bryan, one of those hateful white women in the photo with her face contorted hurling racial epithets at Elizabeth because she felt her story of white supremacy threatened. Turns out that when Hazel started a family, she worried about her daughters seeing her in that photo and felt some shame about it. Her attitude about Civil Rights had begun to change and she began actively to work for social justice, educating herself about the struggle for equal rights. By aligning herself with the perpetrators of hatred and injustice when a teenager, she also became a victim of her own hatred and narrow thinking. The only way to climb out was self-education, community action and sincere apology. In 1997, Hazel and Elizabeth met at the 40th Anniversary of that historic year. Hazel apologized and a reporter took another photo of the two making peace. That was one example of a name being erased from The Wall of Shame. 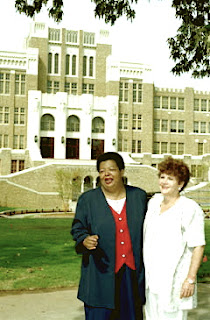 Trying to land on a single point here, but it’s a complex subject. Most importantly, let us all who stand up for human dignity stop squabbling about which of our movements is most important, stop identifying so strongly with just one and join together on the basis of the one thing the all share in common—the need to be treated with dignity. And use this word as the lens through which to see each political proposal: “Does this action/statement/ proposal increase the range of human (and non-human!) dignity or decrease and threaten it?” And then take a dignified stand for or against it. Make sense?