I first encountered the story of Emmett Till in Richard Power’s extraordinary novel The Time of Our Singing. It has haunted me ever since. Of the thousands of brutal stories of slavery, lynchings, police brutality, the ongoing legacy of vicious racism, none have hit so deep at Emmett’s. I’d like to think I don’t need to retell it here because every American would know it. The fact that the vast majority probably doesn’t is why we are where we are. Without knowing the stories, without grief, without remorse and apology and determination to stop the hate, nothing will change.

In brief, Emmet was a 14-year old African-American boy from Chicago visiting his cousins in Mississippi. They went to a store and in a spontaneous moment of Northern bravado to show off to his Southern cousin, he allegedly wolf-whistled at the woman store owner. A few days later, two white men came in the middle of the night and pulled him from the bed he was sharing with his cousin Simeon Wright. They took him away, beat him, mutilated him, shot him in the head and dropped him in the river. Emmett’s mother came down to claim the body and bring him back to Chicago. By now, the newspapers came to report and she chose to have an open casket so the world could see what these people did.

The men not only were acquitted in the good-ole-boy so-called judicial system of the South, but had the gall to sell their story years later to Look Magazine and boast that they indeed murdered Emmett Till. They got paid $5000. What’s wrong with this picture?

A year and a half ago, I had the privilege to go to Alabama with our school’s 8th graders on a Social Justice field trip and their the leader retold the story of Emmett Till. And then astounded us by introducing us to… Simeon Wright, Emmett’s cousin! What a moment. Simeon told the story from his own first-hand experience. He was a gentle, soft-spoken man and after the formal presentation, I sat on a couch with him in the hotel lobby watching the basketball game.  I asked him how he survived such horror and his answer was clear and simple: “Religion.” He had found a way to forgive, but not to forget. In an interview recently published he said,

“You don’t seek vengeance now; you seek justice. That’s what I mean by forgiveness. I’m going to leave vengeance to Almighty God and justice to the government.” 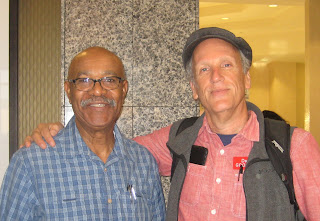 Why write of this now? Because I just got news that Mr. Wright passed away at 74 years old last night. I’m grateful beyond words that I got to meet him. And I imagine his God will greet him with open, loving arms.