A Curmudgeon View of San Francisco

Every time I see it, I curse the Sales Force Tower downtown that appears like an ugly wart on the beautiful face of the old San Francisco Skyline. It lords above everything else and sticks up unwanted from multiple views around the city. Back in the 70’s, San Francisco voters clearly voted against “the Manhattanization of San Francisco” and then suddenly in the past ten years (I think mostly under the watch of Mayor Ed Lee), these monstrosities just started appearing and there’s no apparent end in sight. And besides the uglification of the skyline, they’ve brought in some 40,000 more commuter cars to clog the streets and freeways.

So today, I went to the heart of the beast and visited the Salesforce Rooftop Garden at the base of the building (on the 4th floor of the neighboring TransBay Terminal). It was a lovely space carefully crafted, with planting on the side and signs about native vegetation, attractive places to sit and eat lunch or sketch (my wife was there with a group doing the latter). And then there were all these stations: A Tai Chi place with free outdoor classes, a Cardio exercise space, a Beginning Knitting Station, an Art Cart, a Board Games Cart, a Toddler Tuesday session, a Reading Cart with free books. On the surface, lovely ideas all, generous offerings leaning toward quality-of-life experiences featuring art, music, play, exercise. Reminiscent of going to visit Google with everyone dressed casually and playing volleyball and drinking free organic smoothies. 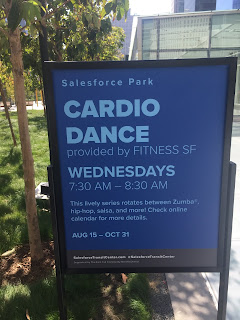 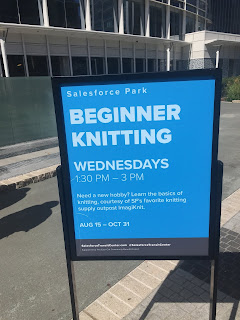 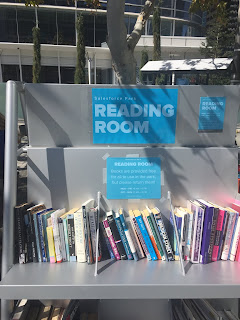 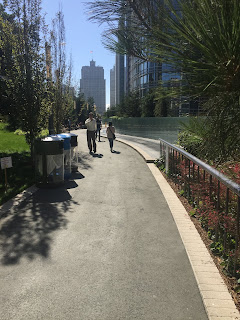 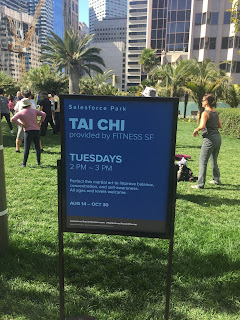 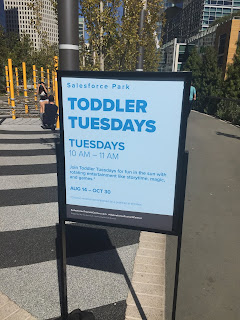 And yet, there’s something off here. All of this is coming from the top down, from the folks with lots of money. In the 70’s when I first moved to San Francisco, all the excitement and innovation and cultural breakthroughs were coming from the bottom up, from poor artists low on money but big on creative vision. The San Francisco Mime Troupe, the Pickle Family Circus, the Zen Center, jazz at Keystone Korner, the alternative schools like my own (The San Francisco School), the Community Food Stores, the artist loft spaces like Project Artaud, the World Music Center over in Berkeley, the Ethnic Dance Festival and so much more. It was at once rough, daring, experimental, occasionally indulgent and sometimes brilliant, real, honest and held together with duct tape and hustle. And it was made possible because rents were as cheap as $40 a month shared with a few roommates (my actual rent on upper Downey Street in 1974!) and the City was affordable to those not working in high-tech.

So good for you, Salesforce Folks, for making a nice park, but hey, we already have Golden Gate park and Buena Vista Park and the Presidio and if I had to trade a place with stations for Art, Tai Chi, Free Books, etc. for a city where a teacher like my daughter doesn’t have to pay $1800 a month living with two roommates in a modest flat, where the streets are less congested, where the skyline is a modest scale, where the tuition at my school could be reduced by half, I’d choose it in a heartbeat. Too late to turn back those clocks, but maybe the Salesforce/Google folks could use their wealth to build affordable subsidized housing for people like teachers and artists, buy up some empty buildings in the Presidio and give huge discounts for studio space for artists, dancers, musicians. Just a thought. Let’s keep San Francisco bold and honest and livable.