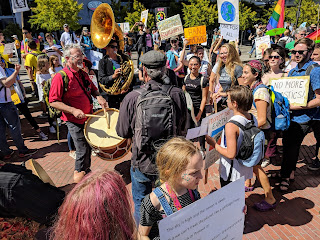 are selling our future down the polluted river. This the Climate Change March and since the issue is so damn serious, we decided we better make it fun. And we did, as we have the past five or six rallies in the past two years. Starting with the oh so clever, hand-made (not corporate-bought), witty signs. For example, a student from the SF School with a sign that something like “Frosty’s worried.”

We weirdly had a very small school contingent, but my colleague James brought his large Brazilian maracatu alfaia drum,  a cowbell that I played, some vuvusela trumpets that the kids played and a sign with my Earth Day Rap written on it (I’ll share it on a future post.). We connected with a group behind us of young people about to study climate change abroad in Vietnam, Morocco and Peru and got them to join us on the rap. One of our kids would say a line and all 15 of them would shout it back, with drums and bells playing. From there, we went into singing “We’ve Got the Whole World in Our Hands” and in-between choruses, I started to improvise some couplets which I fed to the group a line at a time: Things like:

And back to singing the song. Then:

Frosty the Snowman doesn’t want to go.
But how can he live if there ain’t no snow?!”

And then into a verse of Frosty.

And then singing the South African Siyahamba.

Then the challenge was to improvise verses based on the signs around us. Well, that was fun! And on it went back and forth for an hour or so without pause.

When we arrived at the gathering spot, people were painting beautiful collective murals on the street, mandala-like circles with beautiful images and important messages. My wife was part of a group called SF Sketchers and they sketched people while interviewing them about their concerns about climate change and including their comments with the sketch to be posted online.

There were no speeches at the rally, no political haranguing, just concerned citizens saying that it’s time to get out and speak out and sing out and play out and draw out and tell our stories. That felt good, to add art, music, storytelling to the mix. Because the issues are too serious to just get angry and rant and rave. Keep this in mind, dear readers, wherever you may be and get out in the streets armed with your paintbrush, drum, verbal rapping wit and story ready to be told.
Posted by Doug Goodkin at 10:22 PM