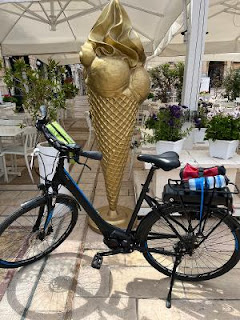 It is in the beginning of things when life is most fresh, new and full of promise. Our childhood, the start of a romance, the beginning of a new job— all open the windows of possibility, are touched with a magic and mystery of not wholly knowing what lies ahead and thus, feeling an extra sparkle to the moment at hand.

So on the first morning of the eight-day bike ride, once we got out of the town and started riding down a country road, I felt my spirit soaring, touching a childhood sense of time and freedom that, truth be told, I haven’t felt for a long time. And so I wrote a first-draft poem trying to capture and communicate a bit of it, thinking that this sense of unfettered lightness and freedom would not come again on the trip.

But I was wrong. At least once every day, with different shadings and nuances, I felt the same unbridled abandon, crossing some bridge to my childhood or young adulthood and feeling wholly 10 or 20 years old in my 70 year-old body. It was often in the morning—again, beginnings— and could not last long, being just the way the world works. What is suddenly novel to the brain quickly becomes commonplace— hence, the practice of making ourselves forever new through meditation, music, poetry, travel and more.

And so thanks Ferula Viaggi, the bike trip sponsors/ organizers for carrying me back to these former selves and forward to my next incarnation. Farewell to my trusty bike, pictured here by the golden gelato that marked the trip and cancelled all calories burned.

Two bike-less weeks ahead and hopes that the daily reincarnation of blessed innocence may still accompany me. Here’s the poem:

It comes as an act of grace, a blessing

A benediction, a soothing song sung

by the long tongue

of the open road.

with its  simple invitation:

Leave behind the neatly folded and carefully considered contents

of the luggage of past selves.

They will be delivered later to the hotel,

But now they are simply excess weight, a burden.

Now is your time to move through the world as you were meant to.

Get up on your bike and coast down the hills

to the welcome warm embrace of World.

Later, the clocks will return and the lists and the luggage,