I’m at the New York State Music Association Conference in Rochester and I kept noticing Frederick Douglass’s name in various places. So I looked him up and sure enough, he lived 25 of his 77 years in Rochester. Quite an extraordinary man who lived quite an extraordinary life and we are all indebted to his courage, intelligence and passion to create a more worthy world. The Wiki entry noted that though he died in Washington DC, he is buried in Rochester.

I had an afternoon before I began teaching and so I made a pilgrimage and walked 6 miles (round-trip) to Mt. Hope Cemetery to pay my respects. The air temperature was 35 degrees and with the wind whipping around, I’m sure the chill factor was in the late 20’s. The cemetery was enormous and consulting a posted map, thought I might find it on my own. The map indicated that Susan B. Anthony was also buried here, as well as some of Buffalo Bill’s children. So now I hoped to find two of the gravesites— you can guess which.

But no such luck. So I found the main building and with a little help from a friend and a few modest signs to point the way, I finally found his gravesite, and then a bit later, hers. So sweet to see some “I voted” stickers near the grave, left by women who were thanking Ms. Anthony for the right that she worked so hard—along with Frederick Douglass! (and of course, countless other women)— to procure.

Apparently, a month before Douglass died, a young black man visited him and asked his advice to a young man starting out in the world. Without hesitation, Douglass proclaimed: “Agitate!! Agitate!!” If we note one of the dictionary definitions— a campaign to arouse public concern about an issue in the hope of prompting action—both Douglass and Anthony are the poster people for a life based on constant and needed agitation.

Today I thanked them for it.

PS I did note that Ms. Anthony’s gravestone seemed new, as if it had been replaced. My theory is that when the Supreme Court overturned Roe vs. Wade, she rolled over so far that she dislodged it. 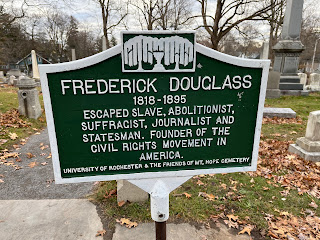 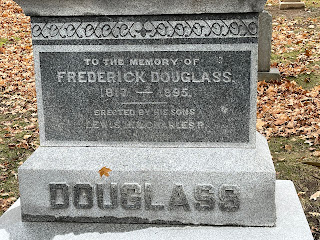 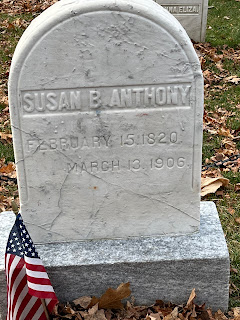 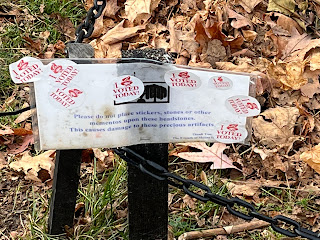