Where can you see a book about Hitler next to another about Scooby-Doo ? Eat an ice cream cone in shorts while listening to a Jewish songwriter’s hit White Christmas sung in Portuguese by Germans? See Santa Claus next to the Three Wise Men while eating chocolate pizza? Why, in Nova Petropolis, of course!!

These were just some of my highlights in my post-course night out in the south of Brazil. I had heard that Brazil was an inverted U.S.— the hotter weather and black population in the Southern U.S. (well, at least before the big migrations to Chicago and New York) while the Germans and Norwegians settled up north in colder Minnesota and Wisconsin, is reversed in Brazil— the big African influence in the tropical north and the German/ Italian immigrants in the sub-tropical south. Whereas everyone typically expects samba everywhere, not so in Southern Brazil. There are German choirs and Italian choirs and gaucho-cowboy gatherings and very few folks with African ancestry. Though the University students and young teachers I taught had that northern Brazilian in-their-bodies rhythmic sense, the town I went to to hear my host’s choir sing—Nova Petropolis—was indeed an old German town, complete with food choices, blonde hair and architecture.

It’s fascinating what image of a country gets exported to the world at large while the actual reality of local culture and demographics is so much more diverse than we can ever imagine. Brazil has been Samba-land for me since the movie Black Orpheus and bossa nova since Stan Getz topped the charts with The Girl From Ipanema. But when I went to Recife years back, I encountered new musical styles I never knew existed—Maracatu, Ciranda, Frevo, for starters. Now I’ll have to include some German-Brazilian, Italian-Brazilian and Gaucho culture in my expanded sense of Brazil. 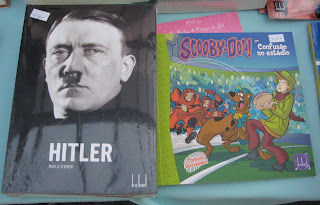 It was an interesting evening, to say the least. I hadn’t seen many outward signs of Christmas in Caxias do Sul where I taught, but here it was with a vengeance— a big Christmas tree in the town square, a little Santa village close to the Nativity scene, multi-colored lights everywhere. I browsed through the outdoor bookstores, curious about a series featuring Hitler, Stalin, Franco and others shelved next to kids’ books— one could leaf through a book about Hitler and then check out the next book on Scooby Doo. Then the first of four choirs came to the stage and sang White Christmas and Winter Wonderland in 80 degree heat. One of the stranger lead-ups to Christmas I’ve had.

It was certainly educational. Amongst many discoveries (including chocolate pizza), I now know that there is another despot that ranks up there with Hitler, Stalin, Franco and their ilk. Of course, I’m talking about Scooby-Doo.