In His Own Sweet Way 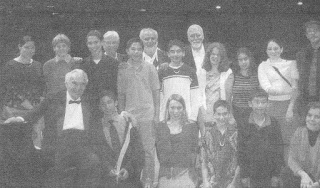 I was six years old when I began organ lessons and eight when I added the piano. By the time I reached 8th grade, the last year of my formal lessons, I was playing Bach on the organ, Beethoven on the piano and listening to Tschaikovsky on the record player. The Beatles had appeared on the Ed Sullivan Show the year before and were the soundtrack to my first make-out parties. (Susan Herman, where are you now?) I had played some songs from a Jerome Kern collection and had watched my share of TV variety shows with live big bands, Disney cartoons and old movies with jazz soundtracks, but up to that point in my musical life, jazz was a foreign country where I had never traveled.

All of that changed when I happened on a record album that caught my ear and opened the door to a world that was destined to be one of my home addresses. In an attempt to keep my restless teenage Beatles-opened self continuing with piano lessons, my teacher got me a book of the pieces from the album and put them on my practice list. Those tunes proved to be my passport across the border and the group leader my first guide. The album was called Time Out and the group was The Dave Brubeck Quartet. Yesterday, one day short of his 92nd birthday, Dave Brubeck left us, took some time out from this earthly life and passed to the other side.

You can read the details of his remarkable life in the obituaries—growing up on a cattle ranch near Concord, studying at University of Pacific (which now hosts The Brubeck Institute) and later at Mills College, forming his famous quartet in 1951 (the year I was born), an integrated group with black bassist Eugene Wright, bringing jazz to the college circuit, getting featured on the cover of Time Magazine in 1954, apologizing to Duke Ellington that he got on Time before Duke because of pernicious racism, releasing the first million-selling jazz album, Time Out, in 1959,  expanding jazz’s reach with the use of odd time signatures and continuing to compose, perform and teach up until the last months of his life.

By all accounts, he was a devoted family man, raising six sons, most of whom became performing musicians in their own right, a devout Catholic, a dedicated musician and a sweet man. He was grateful to the black culture and musicians who inspired him and outspoken about racism. Along with Louis Armstrong, Duke Ellington, Dizzy Gillespie and others, he was one of America’s jazz ambassadors, bringing this beautiful music to countries far and wide and being inspired in turn, like Duke, to write new compositions from the influence of other culture’s music. (Blue Rondo a la Turk is perhaps one of the most famous of those inspired rhythms, combining a Turkish 9/8 meter with a Mozartian rondo form and an American blues middle section).

As mentioned at the beginning, Dave Brubeck opened the door to jazz for me. But I must confess that once I passed through and met Count Basie and Art Tatum and Charlie Parker and Bill Evans and John Coltrane and Miles Davis and on and on, I didn’t listen much more to Dave. But in 2001, I noticed he was performing at the SF Jazz Festival. Serendipitously, I had decided to try Take Five with my 8th grade students that year and grabbed the opportunity to take the kids to see him at Masonic Auditorium. He was 81 at the time and played a fabulous concert. I had always thought of him as the Alan Watts of jazz, making it palatable and accessible to an uneducated white audience. (For those who don’t know him, Alan Watts did the same for Zen Buddhism). But now I saw that he deserved his place among the best— an innovative, expressive and formidable piano player who kept growing his whole life. His voice was unique and to paraphrase one of his great tunes, he did everything “in his own sweet way.”

After the concert, we waited near the backstage door to see if he would come out to greet us. Fifteen minutes later, when the audience had cleared out, he came back to stage and invited us up. I told him that I was in 8th grade when he first opened my world and now here I was with my 8th grade students. He was so appreciative, warm and generous to them—and to me— and his agent later wrote a note saying that Dave had enjoyed the school CD I had given to him.

I’ll close with a reflection from one of those 8th graders, made more poignant by Mr. Brubeck’s recent passing. I know he leaves us born on the wings of all the love and inspiration he generated in millions worldwide and I imagine him treasuring these words as much as any of the numerous awards he received.

“It’s hard to describe the feeling I felt when I walked downstairs in the morning, and learned that we had 25 tickets to the Dave Brubeck concert. I could immediately picture Mr. Brubeck and his quartet playing Take Five and everyone cheering.

When Dave started to play his first tune, accompanied by the amazing bass player and drummer, and then the saxophone and flute, I was impressed by how beautifully the instruments complemented each other. The concert was great—I was in awe when Dave Brubeck played.

When I am old and have lived for many, many years, I will remember the night when Dave Brubeck’s quartet and my 8th grade class met. In thirteen years of living, I have never been so lucky as to meet one so famous as Mr. Brubeck. The night of November 2nd will be in my mind until my soul calls it quits.”   —Nick Makanna
Posted by Doug Goodkin at 11:17 AM