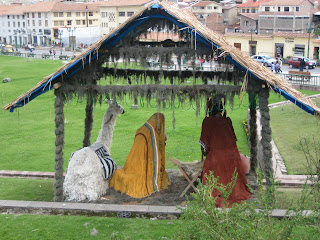 I’m always amazed when exported religions don’t change their imagery and amused when they do. Buddha was from India, but if you look at sculptures and paintings in China, Japan, Korea, Thailand, surprise! —he looks Chinese or Japanese or Korean or Thai. At the same time, Christians in those same countries don’t give Jesus an Asian face. Instead, they worship a blonde blue-eyed Northern European even though the historical Jesus was a Jew from the Middle East. We all have the natural tendency to form our gods in our own image, to picture them as a neighbor we could borrow sugar from and chat about the weather. But we also have the capacity to override that, with black folks adoring a white Jesus and American Buddhists bowing to an Asian statue. Go figure.

Today walking around Cuzco I came upon a Nativity Scene in a park with a llama next to Joseph and Mary. And I just had to wonder: “How did that llama get to Bethlehem?”

Welcome to the wonderful weird world of human beings, a befuddled mix and mess of contradictions. And you can see a lot of it here in this ancient Incan city turned Spanish turned tourist turned modern. Those traditionally-dressed women out of the old National Geographic photos talking on their cell phone under the Starbucks sign. The kids huddled around the plastic Barbies, the tourists around the handmade Peruvian dolls. Me sitting in the plaza writing in my journal, then back to the hotel to get connected on Wi-fi and post this blog.

Today was a sunny Sunday high up in the Andes and not exactly a day of rest. Those traditional women with their llama on a leash dressed for show, getting tourists to take their photo for money.
The shoeshine boys insisting they could improve my black canvas Adidas. The restaurant hustlers trying to get us in to try their pizza or tacos, guinea pig or alpaca. Most stores open on Sunday, ironically, most churches closed. At least by 11am.

Walked a suggested guide-book route around the city and came to the market. Ah, such familiar territory, all those open-air or high-roofed markets I’ve known in Guatemala or Brazil or Ghana or Bali or Barcelona— well, just about everywhere I’ve traveled beyond Costcoland. Entered the market and this was no tourist attraction, but the real deal—whole slaughtered pigs laid out on slabs, bags of spices and herbs, 20 varieties of potatoes. Stopped to have a smoothie licuado and bought some small bananas and Brazil nuts. Crowded, chaotic and festive all at once.

After the market, passed an old toothless woman dragging three heavy sacks of unprocessed wool. Three steps forward, rest two minutes, three steps forward, rest two minutes. My wife and I passed by her, as did all the pedestrians, but a block later, I suggested we go back and help her. We did and though perhaps she spoke only Quechua and didn’t understand my Spanish, I’m sure she understood my gestures—and yet she refused. Why I’ll never know. Perhaps she didn’t trust me, perhaps this was her daily workout routine. Oh well.

A lunch of quinoa soup. At first surprised that they knew such a designer grain and then—duh! This is where it comes from! Only exotic to us Americans shopping at Trader Joes. Back to the lovely hostal (Amaru in case anyone is planning a trip here) for an afternoon of reading and resting. And realizing that sunblock at this altitude needs to be assiduously applied and re-applied.

As for those llamas, there was a llama farm in my college town of Yellow Springs, Ohio back in the early 1970’s. They seem to be everywhere in the U.S. these days. So who knows? Perhaps there really was one in the manger 2,000 years ago in Bethlehem.
Posted by Doug Goodkin at 3:10 PM