1)    In 1974, my wife Karen (then girlfriend) was in her first year teaching art at The San Francisco School. Someone donated six Orff instruments and the staff hired someone to train them in the basics of the Orff approach. At the time, I was volunteer teaching Orff classes at The Rivendell School, trying to remember what I could from my college classes with Avon Gillespie. I asked whether I could come to the workshops as well and I did. The teacher, bless his heart, was incompetent and they fired him after two classes. I offered to do one class and they hired me. It made a slight impact on my life—I’m about to finish my 42nd year , my wife retired last year after 42 years, both my children went there for 11 years (and two nephews for several years as well) and my youngest daughter Talia is now the 5th grade teacher. The one cute little game I remember from that incompetent teacher involves a circle that expands and then runs back into the center while singing:

Windy weather, windy weather. When the wind blows, we all come back together.

2)    Yesterday, we had a picnic in the park to celebrate the retirement of Patty Corwin, our
beloved school cook for almost 40 years. As many testified, her kitchen is one of the spiritual centers of the school, the place filled with the sensuality of smell and taste and warmth from the stoves and warmth from the atmosphere she creates that helps everyone feel at home instead of in an institution. It’s the place for laughter and tears, for rumors and gossip, for sharing great books and movies, for re-telling the old classic stories after seeing an alum from 20 years ago and telling the hilarious stories of the kids we teach today. Karen and Talia got to read touching speeches and I led a song or two, a homage to our partner in longevity who will leave her signature as a smell in the air, the smell of spaghetti carbonara, Shepherd’s pie and of course, pizza.

Because it is Spring in San Francisco, the weather was windy, things toppling down and skirts billowing, that small turbulence when a big change is afoot.

3)    Ended the day watching the video of American Pastoral, a film about the late 60’s and early 70’s and the various bombings from the group called the Weathermen (taken from Bob Dylan’s line: “You don’t need a weatherman to know which way the wind blows.”) A hard, but important film about the estrangement of two parents from their daughter who joins that group. It captured perfectly a time I lived through, when privileged kids with good intentions went crazy trying to lead a revolutionary movement at 21 years old. We were young, naïve, inexperienced in the ways of the world and vulnerable to going down all sorts of dark paths, from the Weathermen to Guru Maharaji to drugs to becoming a Jesus freak, flower children adrift and being blown about in the windy weather without a ground.

The Civil Rights Movement, by contrast, was anchored by a religious faith and led by a preacher. Its values were solid and rooted in a genuine interpretation of a 2000 year-old radical prophet dedicated to a hard-won peace and love far different than the frivolous slogan inspired by medicinal plants and reading a few books on Zen. We white hippies and Yippies and Young Socialists and such were so confused—the kids in Colombia taking over the office and smoking Daddy’s cigar with their feet on the desk. Our intentions were good, our protests were necessary, our hearts were aiming for the right place and we sent a wind blowing through a culture that needed a cleansing. But we needed our share of suffering, genuine struggle and maturity to create real change.

It was a hard time for parents and children, a time when the “generation gap” yawned wide indeed. Most all my counter-culture friends felt some level of estrangement from their parents as they questioned race, war, women’s roles and rights, business. We all wondered if the necessary move to mortgages, jobs, children and such would find us ending up like our parents, “selling out to the Establishment” as we said back then.

Did we? I think not. Of course, maturing into adulthood helped us understand our parents better, their choices and sacrifices and struggles, but most of the folks I knew held on to their progressive values and passed them on to their children. These days, the “generation gap” has more to do with speed on the latest tech gizmo than contrary values. Most of the folks I know are taking to the streets in protest with their kids, enjoying the victories of the shifted gender roles and ever-widening tolerance and celebration of diverse ways of being in this world.

So here we are 50 years after San Francisco’s Summer of Love out on the streets again,but this time with political savvy, life experience, a sense of humor, measured thought and strategy. Today my wife and daughter and I celebrated Mother’s Day by sharing our mutual love for the outdoors and hiking some 15 miles on Mt. Tam. (Never once hiked or backpacked with my parents!) Then we all went to a weekly “Resist” meeting to write postcards to our Representatives in Congress and call for a non-partisan committee in the Russia investigation, for woman to be represented in the SenateHealth Care Working Group, to voice our objection for relaxing limits of corporate control of media and so on. The atmosphere was fun, convivial, informative, organized— the same folks I would have screamed slogans in the street with now engaged in feisty banter about these bad, bad men who we had to try to stop with pens, postcards, petitions and other non-violent forms of political pressure and protest. 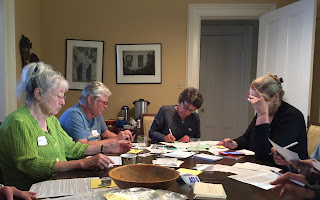 And so the winds of the 60’s are blowing fervently yet again, but this time we’re more prepared with the hatches battened down. Instead of protesting against our parents’ generation, we are now protesting for and with our children’s and grandchildren’s generation.

And looping back to being hired at The San Francisco School and bidding goodbye to a longtime colleague from the same school, this is where I and my colleagues did the most important work in building a new generation of children now adults working to better the world, almost without exception each more knowledgeable, more caring, more kind, than the average Joe. Crosby, Stills and Nash told us to “teach our children well” and I believe in this school we have done just that.

But not well enough, as the victories set in motion 50 years ago are daily in danger of being washed away by the shameless folks in power representing ignorance, greed and cruelty. We relaxed and went our separate ways during the Obama Administration, hoping he would take care of things. Now we have leapt to the next stage of evolution—it’s we that have to be constantly vigilant and on top of our democratic responsibilities. And so we gather on Sunday afternoons to write postcards or take to the streets or keep each other informed on Facebook and begin to reclaim our collective power. And that little rhyme says it all:


When the wind blows, we all come back together.
Posted by Doug Goodkin at 7:40 AM