Me and Leonard Cohen

Went to the Jewish Museum yesterday to see the exhibit on Leonard Cohen. Truth be told, I didn’t know his music well—certainly Suzanne (and mostly from Judy Collins’ version) and much later Hallelujah and Dance Me to the End of Love, but that was about it. This last I recorded with the older kids at school, featuring a boy singing who gave me a lot of grief in music class from 3 years old to 11 and then took a turn as he was bitten by the bug of self-expression through music. I gave his graduation speech and spoke about how it’s important to stay in the dance for the long haul with kids, how in this case we both found love at the end of our 11-year dance.

It’s clear that fame and fortune never had me on their list, but I’ve had the good fortune to rub shoulders with those much higher up. Bobby McFerrin was a school parent, Milt Jackson came to my school to play music with the kids, as did Stefon Harris, Herlin Riley and Marcus Printup. Regina Carter and T.S. Monk (Thelonious’ son) were gracious guest teachers in my online Jazz Course. And Leonard Cohen? We shared a Zen teacher, Joshu Sasaki Roshi and both went to the same 7-day meditation retreat. And here’s the photo to prove it— Roshi on the left, me, someone else and Leonard. 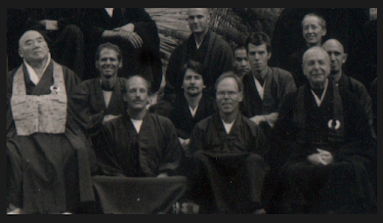 Since it was a silent retreat, I didn’t get to talk to him, but it was nice to sit zazen across from him. And at the end, the little party where you were allowed to talk, I was tempted to tell him I had my Bulgarian bagpipe with me and would he like to hear it? But alas, I never did. Perhaps he would have featured it in his next concert.

Listening to his music again during and after the exhibit, the three songs I already knew stood out as the most musically interesting and though I find the poetry of the others powerful, the music itself doesn’t inspire me. But in the various concerts featured in the exhibit, it was clear that he touched a nerve in the culture and in the hearts of the listeners. Looking at the audience listening with such intensity, as if their lives depended on it, made me nostalgic for a time when music in the culture had that power to quiet a room and bring people together with the words/ sounds/ gestures that were precisely needed it in that moment. Not entertainment, not flash and dazzle, not the mosh pit, but a room of people gathered to drink the sweet nectar from the flower of song.

Everybody got this broken feeling like their father or their dog just died.

Everybody talking to their pockets. Everybody wants a box of chocolates

And a long stem rose. Everybody knows. (From song Everybody Knows)

My friends are gone and my hair is grey.

I ache in the places where I used to play.

In the tower of song.  (Tower of Song)

The birds they sang at the break of day.

Start again, I heard them say.

Don’t dwell on what has passed away

Or what is yet to be.

Ring the bells that still can ring.

There is a crack in everything.

That’s how the light gets in. (Anthem)

Thank you, Leonard. Inspiration enough to see me through this day and those to come.

PS And sorry I didn't have the nerve to talk to you— that last song would have sounded great with Bulgarian bagpipe!