Me and Robert Bly

Today I found out that the poet Robert Bly passed away last week, one month short of his 95thbirthday. It was comforting to hear he was surrounded by loving family members and that on his last day on earth, Chopin was playing in the house. Here’s a short tribute I offered on Facebook:

R.I.P. Robert Bly. Thanks to you, this group has met twice monthly for 31 years trying to help each other figure out how to be human beings in men's bodies. Accompanied by your stellar collection of poetry in The Rag and Bone Shop of the Heart. Blessings to you for your courage and determination to bring poetry into the heart—or at least the fingertips— of a culture sorely in need of the news it brings. We are blessed to have had you for almost 95 years. May you rest in peace. 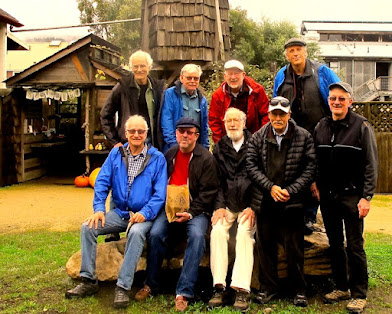 I’ve mentioned this Men’s Group before, but haven’t told the story of its conception, a gift Robert Bly gave to us without ever knowing it. (Now I regret not sending him a photo and thanks before he passed away.) Starting around 1989, I attended many one day workshops and/or evening talks with Robert Bly along with Michael Meade, James Hillman, sometimes Malidoma Some and others. They were gatherings of men trying to discover a positive, non-toxic masculinity that also wasn’t simply embracing feminism (as important as that was). Through myths, fairy tales, poetry, talks and small group discussions, with occasional songs, it was the kind of school worthy of our time— combining intellect, imagination, intuition, heart in a seamless web of search and reflection to consider what has held men back from each other and from a masculine authority that is genuine and inclusive and loving and different from merely copying feminine styles. Each has their dignity, their truth, their beauty, their character, but are not easily transferable between our biologically distinct bodies, brain structure, survival strategies and cultural trainings. While honoring and respecting the Great Mother and her children, it was time in America to see if there was a choice beyond toxic brutality and shame-filled denial of our gender. And I believe it helped and we owe Robert Bly a great debt for that.

And so when our “founding member” went on a week-long retreat with Robert Bly and his fellow teachers, he came back determined to keep the energy going and invited 9 men he already knew to begin meeting. And so we began, in January of 1990, meeting for a couple of hours at rotating houses once every two weeks. We were— and are— a leaderless group, but the host can name a topic and we ritually include check-ins about our lives. The important epiphanies of those first meetings was simply discovering that we were not alone, that we all felt isolated from other men, had had struggles with our emotionally absent fathers, depended on women to cultivate our own emotional life. One man dropped out after the first year, another after five years and one committed suicide in his 11thyear with us. Two “new” men joined in 2003 and here we all still are all these years later, “persistently keeping our small boats afloat” and sharing the stories of our days at sea with others.

So a final thanks to Robert Bly for his extraordinary legacy— his poems, translations, talks, insights born from Jung, mythology and fairy tales, courageous anti-war work and initiating and sustaining work in the “men’s movement.” He kept his large boat afloat for almost 95 years and the world is richer for it. Below is a poem of his and treat yourself to the Youtube video of him reading it.

So many blessings have been given to us
During the first distribution of light, that we are
Admired in a thousand galaxies for our grief.

Don’t expect us to appreciate creation or to
Avoid mistakes. Each of us is a latecomer
To the earth, picking up wood for the fire.

Every night another beam of light slips out
From the oyster’s closed eye. So don’t give up hope
that the door of mercy may still be open.

Seth and Shem, tell me, are you still grieving
Over the spark of light that descended with no
Defender near into the Egypt of Mary’s womb?

It’s hard to grasp how much generosity
Is involved in letting us go on breathing,
When we contribute nothing valuable but our grief.

Each of us deserves to be forgiven, if only for
Our persistence in keeping our small boat afloat
When so many have gone down in the storm.