“There is no progress in art or religion.”  — Gary Snyder

In 1978-79, my soon-to-be wife and I took a trip around the world, her to investigate textile arts, me to study music, both of us to get a glimpse into diverse cultures. I had a deep and rich experience studying the maddalam drum in the state of Kerala, India and looked forward to a similar immersion in Javanese gamelan music in Solo, Java.

Alas, that was not to be as I contracted hepatitis (probably in Nepal) and lay in bed for some 4-weeks in my small room in Java. How to pass the time while waiting to recover?

Why, might as well write a book. Never mind that I had taught for a mere three years at The San Francisco School (where I would return for 42 more) and that I didn’t have any of my class planning books with me. Just buy three Indonesian notebooks, get out the Bic pen and start writing about your experience of Orff Schulwerk.

And so I did. Today, I uncovered those three notebooks and expected to find nonsense from that oh-so-young immature inexperienced teacher. But lo and behold, there were some of the very same ideas, almost some of the same sentences that I recently published in my book Teach Like It’s Music. And then I got out some of my old planning books to look at former classes, again expecting some off-base uninspired ideas and material and again, “Hey, that’s pretty much the class I did last month!” On one hand, depressing that I don’t seem to be progressing and coming up with new ideas, thoughts, musical arrangements (well, actually plenty of the latter) and on the other, affirmation that the blueprint for the oak is in the acorn and the only difference is the number of rings in the ever-expanding trunk.

So below is a photo of the planning books and an excerpt from that Indonesian book. Which incidentally, I did have my brother-in-law type up and edit a bit and sent to some Princeton publishing company that rejected it. I later thought, “Whew. Thank goodness. That would have been embarrassing!” But looking through it again, I think it would have somewhat held up. 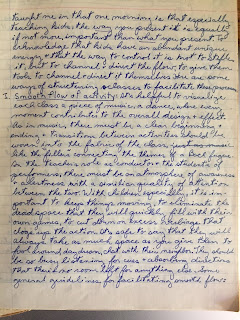 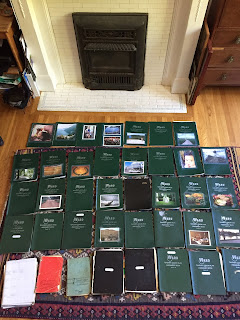