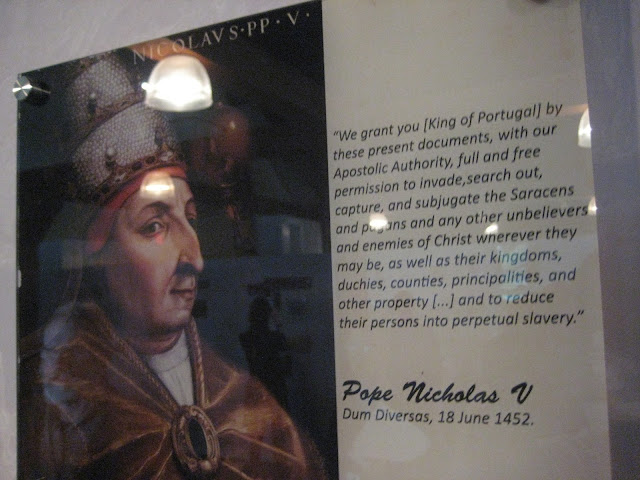 The exhibit in the Whitney Plantation outside of New Orleans begins with this blessing from Pope Nicholas V to subjugate and sentence to perpetual slavery fellow human beings in the name of Jesus, who taught us to love our neighbor. Which the devout Catholics of the time (the 15th century) were quite happy to do and apparently, without any sense of remorse or doubt that this was what Jesus had in mind.

So for the next 550 years plus, this narrative created a mountain of human suffering and misery from which we have yet to recover. Naturally, it was the enslaved Africans and the subjugated and genocidally murdered Native Americans who suffered the most. But also the oppressors who carried some burden of institutionally-approved hatred that surely halted their evolution toward compassion and love and condemned them to be the miserable, brutal creatures they were. Folks who not only trampled down their fellow human beings, but missed the opportunity to get to know them and learn from them and break bread together and make music together and laugh and cry and share the burden of the difficulty that human life is.

Though I’m not naïve enough to not notice that humanity’s capacity from empathy, justice, love is a wild roller coaster ride that has us all dizzy from its rises and falls, though it’s clear we have taken a dangerous dip, not only in the United States, but in Turkey and Russia and China and Venezuela and many other countries worldwide, still I hold to the faith that that moral arc does indeed keep bending to justice.

How do I know? The Whitney Tour ends with this quote by Pope John Paul in 1992 while visiting a slave castle in West Africa. (That first sentence, somewhat cut off reads: "These men, women and children were the victims…) The evolution that happened between the two Popes, at least in terms of developing a new, more just, more compassionate narrative, is clear. And inspiration for us all to keep the “new” story that Jesus envisioned over 2000 years ago moving forward. 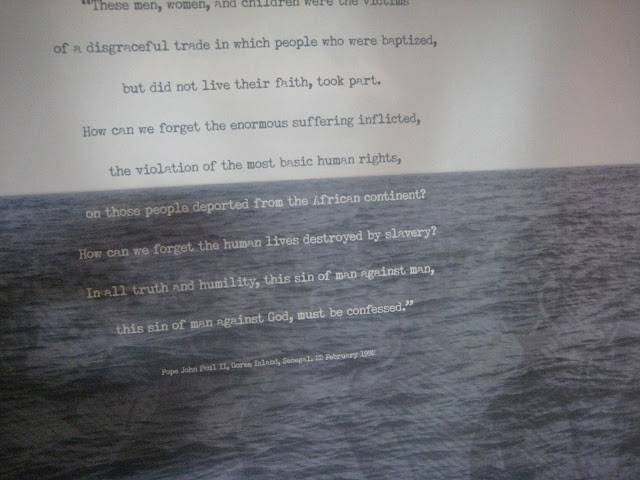 May we remember. And in remembering, teach the new story of apology, reparations, redemption and liberty and justice for all.