On my last day in New Orleans, we rented some bikes and rode to visit the cemetery where my wife’s great-grandparents were buried. It was big, the office gave us the wrong directions, time was tight, so in the end, we didn’t find them. But it was interesting—and apparently okay with the folks in charge— to be riding a bicycle in a cemetery.

From there, I made my pilgrimage to the site of Louis Armstrong’s house on Jane Alley. I heard that it was gone and so was prepared for that, but it was pretty sobering that in a place that used to be a neighborhood that somehow spawned one of the most influential musical voices of the 20th century, there was a large police station and a nearby freeway. (A freeway that was build straight through the parade grounds of the Treme neighborhood and severely disrupted their traditions. Boo hiss!) In front of the police station was a plaque acknowledging the site and reporting that it was demolished in 1964.

So let’s think about that for a moment. In 1964, Louis Armstrong was 63 years old and still going strong. That in itself is remarkable, the men who virtually single-handedly lit the jazz fire so it went from a provincial folk style to a universal flame that warmed people the world over, stayed with it through its various incarnations, from the New Orleans-style to the 30’s swing bands to the continued blossoming of the popular songs in the 40’s and 50’s. He didn’t move with all the changes— be-bop was not his thing nor was cool jazz or free jazz or Coltrane’s fiery improvisations. But still he delighted audiences world-wide and in 1964, his well-established reputation reached a new generation when his version of Hello Dolly was number one on the charts and number three of the top 100 of the entire year, beat out by I Want to Hold Your Hand and She Loves You by a group called…oh yeah,  the Beatles.

And so while Mr. Armstrong is at the peak of his fame and arguably one of the most recognizable Americans in the country and worldwide, some redevelopment agency in New Orleans decides to raze the house in which he was born at 743 Jane Alley. Was there no one at the Planning Commission Meeting who objected? No one in the community who said, “Hold on there! Let’s re-think this!” Apparently not. According to my extensive Wikipedia research, the reason for tearing down this landmark of American history? The building of the I-10 Freeway.

Welcome to America. I don’t think anyone in Salzburg would have accepted tearing down Mozart’s house for a freeway. Just sayin’. Food for thought. 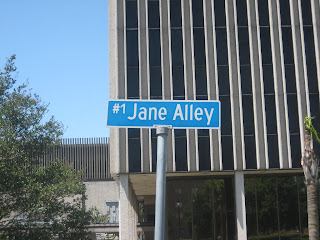