Readin’, ‘ritin’ and ‘rithmetic are still the stuff that schools are made of and I have no argument with that. But those 3R’s will only get you so far. Once you’ve mastered them, the question is “What are you going to do with them? Use words to tweet hateful messages? Use numbers to add up the money you’ve hoarded to buy one more car or house or yacht that you don’t need? Read the Facebook posts of everyone who agrees with you?" 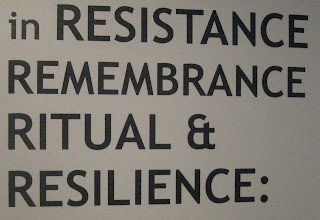 Well, this sign (with the word "Rooted" off to the side, but cut out of this photo) in the Backstreet Cultural Museum in New Orleans adds another four. Imagine teaching a thinking resistance over blind obedience, a learned remembrance over purposeful ignorance of history, a calendar of joyful ritual and celebration and a flexible imagination that can move along and improvise in the changes. Wouldn’t that be a praiseworthy use of mastering the 3 R’s?

100 years ago, schools never would have considered this for a second. They might have some token music and art and physical education and begin to think that they should help cultivate a future responsible citizen. But at least at the beginning of formal schooling, it was simply the concrete skills of literacy that were the point and learning to be a good neighbor, a good citizen, a good human being, was left to the accident of family and church and maybe the Boy Scouts or Girl Scouts.

But now schools are expected to become everything for children—their parent, their counselor, their coach, their therapist, their friend, their social worker, their psychologist and…oh yeah, their teacher. An impossible expectation, but if we’re going to try to take on some of these roles, why not use the extraordinary opportunity of children held captive in school buildings to actually cultivate thought that leads to questioning that leads to resistance when needed. To teach history as if its patterns were more than yesterday’s news and indeed, were showing up in today’s if we only knew how to perceive them. To create a school community where everyone knows the same songs and dances and also knows how to sing and dance and play instruments and act and sculpt and paint and write poetry and put it all together in rituals, ceremonies, celebrations and performances. To teach toward a “growth mindset” where mastery comes from directed effort and difficulties and challenges are understood to require yet more directed effort, to create a fluid sense of self perpetually on its way and not limited by anything beyond it’s own lack of conviction that “not yet” is the truth of everything we would like to become that we haven’t—yet.

Resistance. Remembrance. Ritual. Resilience. These Four R’s are precisely what we’ve aimed to cultivate in The San Francisco School these past 50 plus years and my contact with alums out in the world doing good work with good minds and good hearts convinces me that these efforts are worth making. And still so many schools and school boards choose mindless testing, refuse to tell the truths of history, care nothing for the arts or meaningful celebration and let children graduate who are convinced they’re not smart or talented and don’t see anyway to move toward their full promise.

So, fellow teachers, post this around your school and let’s get to work.
Posted by Doug Goodkin at 9:37 PM