Life in the Slow Lane

What would it be like to take your time in this life? Move slowly, enjoy, savor. Stop rushing from here to there and make every there a here. Put your ambition on a leash and take it out for a walk as needed, but not let it pull you hither and thither. What would that look like? What would it feel like? And what if everyone around you agreed?

Well, it could mean long meals in restaurants, back yards, parks or porches, with lots of time for convivial conversation and slowly savoring the remarkable food prepared slowly and with care.
It could mean parades in the street with music and dancing, going nowhere in particular and for no other reason than to enjoy the journey. It could mean gathering in a room to do something as useless and supremely important as singing together and then standing up and testifying how your spirit was touched. It could mean sitting on a park bench with a drum and attracting other drummers and sharing rhythms while a crowd began to gather. It could mean countless hours spent stitching up a costume so you could display yourself like a proud peacock in an outrageous explosion of color and shape. For no other reason than to proclaim: “Here I am! Isn’t it marvelous?! And now show me who you are!” 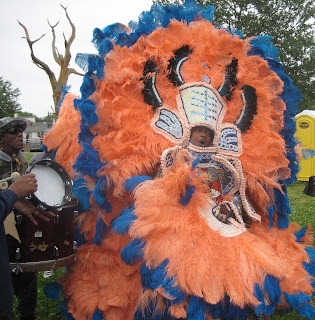 Welcome to my day yesterday in New Orleans. I had the supreme good fortune to arrive in time for Super Sunday, a gathering of the Chiefs of the different Indian groups. After a delightful lunch and a mandatory Po’ Boy sandwich at Parkway Bakery, I joined the gathering throngs at the Bayou and watched as they prepared themselves for the parade. Then marched—well, danced—alongside as they processed down the streets.

Not exactly new for me—from following a Balinese cremation procession to a Horse Dance Festival in Ghana to Pooram Festival in India with bedecked elephants to a Sri Lankan Festival with stiltwalkers and beyond to Maibaum in Salzburg to San Francisco’s Carnaval and Day of the Dead with Aztec Dancers, it all felt familiar. But that didn’t make me admire it less. San Francisco’s parades (see above) are fun, but relatively new and a free-for-all of expression. Here is something deeply routed in history, with Chiefs carrying on the traditions of the grandparents and little children initiated into the cultural lore. Indeed, one of the tell-tale signs of an authentic culture is the presence of all ages and that was absolutely the case, little kids dancing  alongside grandparents, teenagers, a whole group of folks in wheelchairs, even policemen feeling the groove.

From the parade, I went to Congo Square and met a man who leads a Sunday afternoon African drumming gathering. A generous soul who starts a groove and gives out grooves to the other drummers and then hands a bell to a passer-by. One man said, “I don’t have any rhythm” and the leader put his hand on the man’s chest and says “You heart is beating in there” and gave him the bell and the pattern. Turns out the man was right—he couldn’t play the simple syncopated pattern if his life depended on it! Of course, he does have rhythm, but since his schooling and culture failed to draw it forth, he would need some remediation work. Luckily, he dropped out after a few failed attempts and the music went on.

To be drumming in Congo Square was quite a dramatic moment for me. Here is where, a couple of centuries ago, slaves were allowed to gather once a week to drum, perhaps the only place in the United States where such things were permitted. Because the population of enslaved people came from disparate ethnic groups in West Africa—the Wolof, the Bambara, the Mandinka, the Fula, the Senufo, the Fanti, the Akan and more—they would not have a common vocabulary of rhythms and songs. So they would have to mix and match and listen and improvise and create new grooves from their situation of exile. And I think it’s safe to say that this kind of creating from scratch was the impulse that led to jazz.

From the drumming, we went to a community sing led by Dr. Ysaye Barnwell, one of the singers from the group Sweet Honey on the Rock. It was not easy to find and we arrived so late we only got in on one song, an improvised harmony on the much-needed phrase of our time: “We are the ones we have been waiting for.” A song to empower all of us to unveil our Rosa Parks/ Dr. Martin Luther King selves and not wait for a leader to take us to the promised land of social justice, freedom and a joyful and sustainable life. After the song, various people stood up to testify how Dr. Barnwell had affirmed their spirit and helped them connect deeper to their African identity. Some 90% of the participants were black and as a guest in their “church,” I had the good sense to shut up and not say anything. But had I done so, I would have complimented the space they made in the front for the children to be there playing on the floor.

So hooray for you, New Orleans! A place that values quality of life over mere speed, ambition, material success and technical prowess. I know there are deep shadows as well. Poverty, racism, perhaps less ambition than there could be, excessive drinking, from tourists and natives alike. But hey, every place has positive virtues and shadows and always has and always will. This is the moment to praise and admire and be grateful that such a place as this exists in the United States.