July 4, 1900. Independence Day at the turn of the new century. This was the day Louis Armstrong, one of the major icons of that century and symbol of a new face to musical freedom, claimed as his birthday. Later sources named August 4, 1901 as the real day. But sometimes mythology speaks truer than facts. Armstrong’s musical freedom helped pave the way for other freedoms fought for in the 20th century. 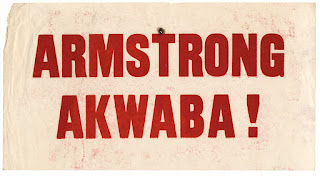 May 23, 1956. Louis Armstrong arrived in Accra to perform in his ancestral home. During the tour, he spotted a woman who looked like his mother Mayann and he was convinced that he must be descended from enslaved people stolen from this land. And now he was coming full circle to be welcomed by a crowd of some 10,000 people shouting “Armstrong Akwaba!” (the Akan word for welcome, now spelled Akwaaba). At this time, Ghana was in a transition period of moving from being a British colony known as the Gold Coast to an independent nation led by its first president, Dr. Kwame Nkrumah (see below), an independence finally realized in March of 1957. 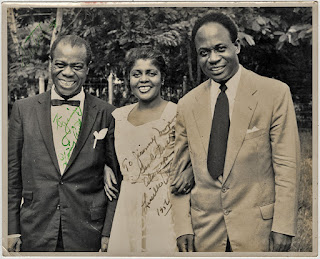 Thanks to the people who documented this on film and Youtube's easy access, you can see some of his visit. Especially interesting is a scene where the Ghanaians are playing their complex and dynamic drumming and dancing for Satchmo. He then responds in kind with some New Orleans style music and the people look puzzled. To my ears (and perhaps theirs), the rhythms that revolutionized music in America and felt so complicated and vital come across as flat and mono-dimensional in contrast to the rich polyrhythmic African ones. When an old man totters across the open space to dance, the people begin to bob their head and finally accept Louis’ invitation to come out and dance, finally recognizing something familiar in this watered-down descendant of their rich, unbroken tradition.

July 3, 2018. I went to a jazz club last night in Accra and heard a band with a trumpet player playing songs from the post-Armstrong jazz repertoire. Descendants of the Ghana to U.S. back to Ghana exchange.

July 4, 2018. Today I’ll go to a workshop by Body Music musician Keith Terry introducing his work to students at the University of Legon. Then will travel with him and others back to Dzodze to continue this practice of African-inspired rhythms played on the body instead of the drums. Besides Keith, there will be artists sharing American Steppin’, South African Gumboot Dancing, Cuban rhythms played on the body, tap dancing and more. Like the conversation we began in 2014 between Orff pedagogy and traditional African teaching (Orff-Afrique), this promises to be an exciting cultural exchange, modeling how things could have been if Europeans coming to Africa had not been burdened by their sickness of arrogance, power, greed and a God who insisted that only he was true.

Last night, watched the excellent talk given my Chimananda Ngozi Adichie, the Nigerian writer whose book Half a Yellow Sun I just finished yesterday. Her talk is entitled: “The Danger of the Single Story” and warns, with humor and affection and empowerment, about telling a single story about a place or a group of people when truth is always multiple. And affirms the power of stories to both hurt and heal.

So any Americans reading this blog, please do your patriotic duty and give a nod with your friends and family to Louis Armstrong’s birthday. If they say, “Who’s that?” why, let them know they’re in for a treat as you play his music for them. If they know who he is, gather around the screen and watch the footage of him in Ghana. And when you watch the fireworks exploding, give a nod to all those Ambassadors of real freedom, people like Louis Armstrong whose playing was so alive and free and happy, his work holding America to its promissory note of life, liberty and the pursuit of happiness.
Posted by Doug Goodkin at 12:06 AM